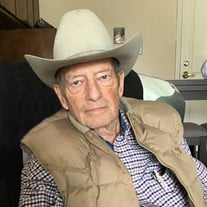 Gerald Maurice King (Gerry / aka Poppy) died on October 8th 2021 due to complications from dementia and heart failure. Gerry was born on August 31, 1944 to Maurice and Olive King, in Eau Claire, Wisconsin. After spending his early childhood in Wisconsin with his mother and step father Loyd Green, he was brought back to Texas with his father Maurice and never looked back. Always living in and around west Texas he and his wife Catherine settle in Odessa and lived in the same house 41 years. After the passing of Catherine in 2020, he moved to Brown County to be closer to family. He loved Texas and all it had to offer, and would never live anywhere else, as there was no place better than Texas, He was often quoted as saying Texas has a little bit of everything to offer. After graduating Lamesa high school in Lamesa Texas, he went on to college at West Texas State in Canyon Texas. Needing to earn more money as he was married and raising two young babies, he entered the metal building industry and never looked back. He loved this industry with a passion and excelled in it for well over 50 years, ending up with NCI building systems for the last 20 years of his career. Over the years he had many great contractors and customers, one of them known to all was Dollar General Stores. Gerry belonged to several organizations. One was the Odessa Chuck Wagon Gang where he loved going all over the country feeding many people their world-famous bar-b-que. Another was the White Mountain Range Riders, this ride and its group of riders is and was the ride of all rides, there simply was no other ride that compared to this group. He loved the fellowship, comradeship, and brotherhood that went with each organization. He had may passions and hobbies two of them being horses and the cowboy way of life, the other being table shuffleboard. He excelled in these hobbies tremendously. Last but certainly not least he loved his family, no one more than the other, but his grandkids certainly were near first place in his mind. Poppy loved being the "hero" and along with mom having lots of gifts for all the kids come Christmas time. He was preceded in death by his wife of over 40 years Catherine King, his mother and father Maurice King as well as Olive Green. His daughter Shonna Davis also passed away in 2017. His is survived by his children Brent and (Carol) King of Bangs Texas, Randy and (Sonja) Pierson of Lubbock Texas, Scott and (Cissy) Pierson of Odessa Texas, and Tammy and (Jerry) Crain of San Antonio Texas. Gerry and Catherine were married 41 years and had 5 children combined, total they had 12 grandchildren and 16 great grandchildren. He will be missed dearly and thought of often, his legacy will continue. He was often quoted as saying "Don't be Short" meaning don't be short in life! Gerry's family would like to share a special thank you for all the love and care that Hill Country Home Care and Redstone Park have given him over the years. Service will be held at Sunset Memorial Gardens in Odessa Texas on October 14th, 2021 at 3:00. All who knew Gerry are welcome to attend.

Gerald Maurice King (Gerry / aka Poppy) died on October 8th 2021 due to complications from dementia and heart failure. Gerry was born on August 31, 1944 to Maurice and Olive King, in Eau Claire, Wisconsin. After spending his early childhood... View Obituary & Service Information

The family of Gerald Maurice King created this Life Tributes page to make it easy to share your memories.

Send flowers to the King family.