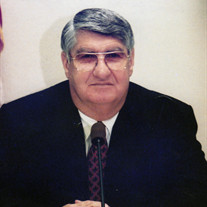 Grady Milton Chastain came into this world on October 12, 1938 to the late Harvey Baugh Chastain and Bonnie Ellis Chastain. He was affectionately called G-Daddy by his family. Grady left this world behind and went to be with his Lord and Savior on Friday, April 9, 2021. Grady was a lifelong resident of Brown County. He was born in Grosvenor, Texas and attended Brownwood High school. After high school, he attended and graduated from Howard Payne University. Grady married his high school sweetheart, Patricia Ruth Brooks on August 4, 1957. He was a great outdoorsman and loved quail hunting with his bird dogs, playing golf and watching his Brownwood Lions win at Gordon Wood Stadium. But his greatest joy was raising his family and watching his children, grandchildren, and great grandchildren grow. After graduating from college, Grady loved his work as a pharmaceutical salesman. He loved visiting the doctors' offices and establishing these lifelong friendships. After retirement, Grady followed his calling and established Cornerstone Fellowship Church where he led many lives to Christ. Grady was a pillar in his community. For six years he devoted his time to the youth and education of Brownwood as a Trustee of the Board of Education of Brownwood ISD. He also served on the Brownwood City Council. Grady Milton Chastain leaves behind a legacy with his family. He is survived by his loving wife, Patricia Ruth Chastain; two sons, Grady Douglas Chastain and his wife, Jamie Chastain; David Kirk Chastain, and wife Genetha Chastain; and one daughter, Laurie Fay Chastain and her fiancé, Timothy Shane Morrison. Grady is also survived by his grandchildren, Hollie Chastain; Candice Beal; Cade Chastain; Jenna Chastain; Zachary Lindsey; Alyssa Alamia; Katherine Chastain; Luke Chastain; Jake Kittrell; and Jacob Chastain. He is also survived by numerous great-grandchildren; great-great grandchildren, nieces and nephews. Grady was preceded in death by his parents; three sisters, Allene Davis, Betty Flynn, and June Carmichael; two great-grandchildren, Grady Robert Beal and Jackson Mac Beal. They that wait upon the Lord shall renew their strength; they shall mount up with wings of eagles; they shall run and not be weary; and they shall walk and not faint. Isaiah 40:31

Grady Milton Chastain came into this world on October 12, 1938 to the late Harvey Baugh Chastain and Bonnie Ellis Chastain. He was affectionately called G-Daddy by his family. Grady left this world behind and went to be with his Lord and... View Obituary & Service Information

The family of Grady Chastain created this Life Tributes page to make it easy to share your memories.

Send flowers to the Chastain family.