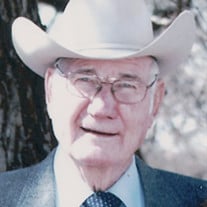 Henry Storey was welcomed into heaven on Sunday, May 31, 2020. A visitation is planned at Heartland Funeral Home from 5:00 – 8:00 PM, Tuesday, June 2, 2020. A private family graveside is planned for interment. Henry was the loving husband of his wife and high school sweetheart, Patsy Spivey Storey, for 66 years. Henry was born October 17, 1932 in Brown County to Henry and Valeria (Smith) Storey. He lived until his death on the farm & ranch his grandfather bought in 1870 after returning from the service in the Civil War. Henry graduated from Early High School, attended Daniel Baker College and the Reid Auction School in Matson City, IA which was the beginning of a long career of diverse occupations. He farmed and ranched all of his life, played in a country & western band, performed custom grain harvesting, served 8 years as a Brown County commissioner at the age of 27, and was a real estate broker for over 40 years. Henry’s primary passion was auctioning. It was truly a family business as all six family members worked together. Henry was selected as a charter member of the Texas Auctioneer Hall of Fame and was a past president of the Texas Auctioneer Association which granted lifetime membership to he and Patsy. Henry was a member of Salt Creek Baptist Church where he served as a deacon for over 60 years. Henry is survived by his beloved wife, Pat Storey of Early; children, Tommy and wife Patricia Storey of Early, Cindy Storey Finney and husband Paul of Arvada, CO and Victor Storey of Brownwood; sister, Bobbie Morris of Abilene; 12 grandchildren, and many great grandchildren & friends. Henry was preceded in death by his parents; son, Steve Storey; and brother-in-law, Bill Morris. In lieu of flowers, memorials can be made to the Salt Creek Cemetery Association (of which Henry was a dedicated officer for many years) at P.O. Box 3407, Early, TX 76803.

Henry Storey was welcomed into heaven on Sunday, May 31, 2020. A visitation is planned at Heartland Funeral Home from 5:00 &#8211; 8:00 PM, Tuesday, June 2, 2020. A private family graveside is planned for interment. Henry was the loving husband... View Obituary & Service Information

The family of Henry Ross Storey created this Life Tributes page to make it easy to share your memories.

Send flowers to the Storey family.