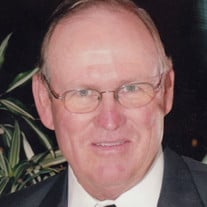 Herman Lewis Lehman, age 77, of Bangs, passed away on Tuesday, April 12, 2022, at home surrounded by his family. Lewis was born on March 27, 1945, at Brownwood Memorial Hospital to Herman Willie and Meina Emillie Lehman. He attended Bangs schools and graduated in 1963. Lewis went on to serve his country in the Army during the Vietnam era. He married Debra Ann Wood on June 18, 1976 in Bangs. He was a lifelong member of Rocky Creek Baptist Church. Lewis was passionate about the advancement and education of agriculture. He served as the president of the Brown County Farm Bureau Board for 20 plus years, he then was nominated and elected to serve as the State Director of District 7 for 6 years, where he also served as the secretary/treasurer for all the state districts, and he also served on the Southern Farm Bureau Casualty Board. He worked on the Farm Bill that was passed in Congress in 2018 as well as taking worldwide tours, including Brazil, Russia, and Austria, to learn about the different cultures and the different farming techniques and to educate the other countries in our ways of farming. In 2019 he was nominated and received the Texas Farm Bureau Pioneer Award for his exceptional leadership and service to Texas Farm Bureau and our great State of Texas. He served as a member of the Bangs ISD School Board for 12 years. He served as the Swine Superintendent for the Brown County Youth Fair Association for 15 years, and he also served on the FSA Board for several years. Along with being incredibly passionate for agriculture he was very passionate for his family and friends. He was a dedicated and devoted husband, father and Papa to every kid that ever-stepped foot on the hill. Lewis is survived by his wife of 45 years, Debra Lehman; children, Wesley Bryan Mullins, Julie Ann Mullins, Josh Wood and wife Erika Wood, Beth Haley and husband Eric Haley; his siblings, Wilford Arnold Lehman, Norton Travis Lehman, and Edwin Jerry Lehman; five grandchildren, Christopher Mullins, Brooklann Mullins, Baylor Gilbreath, Timothy Wood, Beau Wood and six great-grandchildren Kora Wood, Bryar Wood, Collins Haley, Tyler Grace Haley, Cameron Haley, Alyssa Mullins. Lewis was preceded in death by his sister-in-law Brenda Wood, and niece Beverly Lehman. A funeral service for Lewis will be held at 2:00 PM, on Friday, April 15, 2022, at the Rocky Creek Baptist Church. Burial will follow in the Rocky Creek Cemetery. The family will receive friends at the funeral home on Thursday evening from 6:00 until 7:30. Heartland Funeral Home is in charge of arrangements. Flowers are welcome, but if they are not the way you would like to express your condolences we ask that you make a donation to Parkinson.org to help further the research and to facilitate a cure.

The family of Lewis Lehman created this Life Tributes page to make it easy to share your memories.

Herman Lewis Lehman, age 77, of Bangs, passed away on Tuesday,...

Send flowers to the Lehman family.