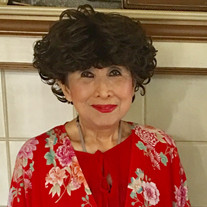 Hiroko Howell 1928 - 2021 Hiroko Howell, 92, passed away peacefully on March 6, 2021. She was born on September 28, 1928 to Shigetaro Matsumoto of Kobe, Japan. After graduating from high school, she attended an English language college,... View Obituary & Service Information

The family of Hiroko Howell created this Life Tributes page to make it easy to share your memories.

Send flowers to the Howell family.