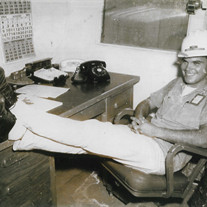 Graveside Service for Mac: The Graveside Service for Horace "Mac" McMahon will be Saturday. April 3, at 2:00 pm. The service will be held at Eastlawn Memorial Park in Early, Texas with David Barnum officiating. Visitation with the family will be immediately after the service at the Early Visitors & Events Center, 419 Garmon Drive/Hwy 183, Early, Texas. Horace E. "Mac" McMahon, 79, passed away and joined the Lord on December 15, 2020. He was born at home in Purvis, Mississippi on September 27, 1941 to the late Julius Everett and Mildred Fillingame McMahon. He graduated from Oak Gove High School in 1960 before earning his B. S. from the University of Southern Mississippi in Hattiesburg, MS. He married the love of his life Rebecca Kay Walker on January 4, 1964. Their union was blessed with three children, and later, four loving grandchildren. The couple relocated to Victoria, TX in 1970 when Mac went to work for Dresser Atlas as a petroleum engineer. Although the couple were dismayed by the flat and treeless landscape of South Texas, they made a happy home and many lifelong friends in Victoria before relocating to Abilene in 1984 when Mac was transferred. After retiring from Dresser, Mac had a second career at the Texas Workforce Commission and established numerous friendships in Abilene. Mac and Kay were blessed to make many additional close friends when they retired to Lake Brownwood in 2001. His final years were enriched by the relationships he forged with his church family, members of the Oak Point Community, and the GWRA group. Mac fully enjoyed his last 20 years fishing from his dock, the challenge of gardening in hard soil with limited rain, touring on his Gold Wing, and bragging on his kids and grandkids. He joked often and laughed frequently. He never knew a stranger and invited everyone he met to share in his joy of being at the lake. Those that knew him, know Mac lived life to the fullest. He loved God and was a devoted husband, father, and grandfather. His greatest pleasure came from spending time with family and friends. He was a patriotic American, proud to live in Texas, and an avid supporter of the Texas Longhorns. Although he referred to himself a Texan, Mac made frequent trips "home" to Mississippi and maintained close ties with his extended family and childhood friends. Mac was a faithful Christian and active member of Grosvenor Baptist Church, who continued to grow in his relationship with God as part of the Grosvenor family. A graveside service will be held at Eastlawn Memorial Park on April 3, 2021. Condolences can be shared with the family at www.heartlandfuneralhome.net. In lieu of flowers, memorial contributions can be made to Grosvenor Baptist Church, P. O. Box 2345, Brownwood, TX 76804. Mac is survived by his beloved wife Kay of Early, TX; two daughters, Melissa McMahon Butler and husband Lynn of Austin, TX and Rebecca McMahon Giles and husband Bryan of Ocean Springs, MS; a son Horace "Mac" McMahon, Jr. of Brownwood, TX; and grandchildren, Rebecca McMahon Butler, Lynn Hamilton "Beau" Butler Jr., Bryan Alan "Jay" Giles Jr., and Kade McMahon Giles. In addition, he is survived by a brother Curtis Everett McMahon of Hattiesburg, MS and two sisters, Dorothy McMahon Lofton of Huntsville, AL and Linda Sue McMahon Rawls of Hattiesburg, MS.

Graveside Service for Mac: The Graveside Service for Horace "Mac" McMahon will be Saturday. April 3, at 2:00 pm. The service will be held at Eastlawn Memorial Park in Early, Texas with David Barnum officiating. Visitation with the family will... View Obituary & Service Information

The family of Horace E. McMahon created this Life Tributes page to make it easy to share your memories.

The Graveside Service for Horace...

Send flowers to the McMahon family.