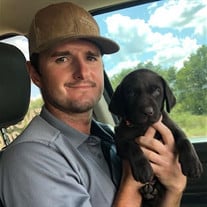 Hunter Scott Kilgo left this world for his Heavenly resting place, at the age of 24, on October 3, 2021 from injuries sustained in a fireworks accident. Hunter was born on January 3, 1997 in Brownwood to Todd and Michelle Kilgo. He grew up in May and graduated from May High School in 2015. He started his own fencing company, Kilgo Fencing, LLC, in 2016 and was truly blessed by his many clients. Hunter accepted Christ as his savior and was baptized during his high school years, at Coggin Avenue Baptist Church in Brownwood. He later became a member of the May First Baptist Church. Hunter is survived by his parents, Todd and Michelle Kilgo; one brother, Tyler Hammond and wife Lacee and nephew Trig; one sister, Kyndi Kilgo; the love of his life, Briley Gismond; Paternal Grandparents, Shorty and Janice Kilgo; Uncle and Aunt, Scott and Vickie Ratliff with cousins Rocky Gage, Kelsie Ratliff and Courtney Moursand; Uncle and Aunt, Chad and Brenda Kilgo with cousin Braxton Kilgo; and so many precious friends. Hunter was preceded in death by his maternal grandparents, Steve and Judy Ratliff; his paternal great grandparents, George and Lillian Michael; his maternal great grandparents, Woodrow and Gladys Ratliff and his sweet lab Lacy that he lost just a few months ago. Hunter had so many big dreams for his company and starting his life with his precious girlfriend; sadly, God needed him more. Hunter loved all things outdoors; including fishing, any type of hunting and he loved golfing with friends. He loved spending time with his girlfriend, Briley, their dogs and his family and friends. Hunter always had a big smile and hug for you. He was always one to stop and help someone whenever needed; he would've given you the shirt off his back if you needed it. He was known far and wide for his legacy of Kilgo Fencing that he built from the ground up, all on his own. He made so many friends and met a lot of kind people in his 5 years of building fence. He was a positive influence to so many and would always encourage you to follow your dreams. He was an amazing young man taken way too soon. The family will receive friends at the Heartland Funeral Home on Wednesday evening from 6:00 to 8:00 pm. The funeral will be held on Thursday, October 7, 2021, at 2:00 pm, at the May First Baptist Church.

Hunter Scott Kilgo left this world for his Heavenly resting place, at the age of 24, on October 3, 2021 from injuries sustained in a fireworks accident. Hunter was born on January 3, 1997 in Brownwood to Todd and Michelle Kilgo. He grew up in... View Obituary & Service Information

The family of Hunter Kilgo created this Life Tributes page to make it easy to share your memories.

Send flowers to the Kilgo family.