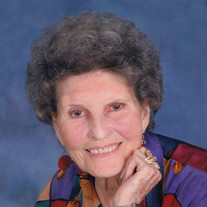 Irene (Ellis) Ashcraft, age 94, of Brownwood, formally of Gainesville, Texas passed away at Redstone Park Friday, September 18, 2020. Graveside services will be held at 3:00 p.m. Sunday, September 20, at Mukewater Cemetery near Bangs under the direction of Heartland Funeral Home of Early. Rick Justice, pastor at Rocky Creek Baptist Church will conduct the services. Irene was born March 23, 1926 in Santa Anna, Texas to John Henry Ellis, Sr. and Maddie Knight Ellis. She was the youngest of several children. Irene graduated from Santa Anna High School. She lived in the Santa Anna area until 1960 when she moved to Sanger, Texas and worked as a secretary for the school system. On November 1, 1975, she married Verline W. ‘Rip’ Ashcraft in Ardmore, Oklahoma. They made their home at Rip’s pecan farm on the Red River near Leon, Oklahoma. Irene began her career with Red River Valley Rural Electric in Marietta, Oklahoma. She retired in 1988 and spent the next few years helping Rip in the pecan orchard. When he passed away in 1993, Irene moved from the farm to Gainesville, Texas. Spending time with her family and many friends and watching her favorite Texas Ranger’s baseball games were Irene’s passion. She looked forward to the morning coffee klatch at the Gainesville McDonald’s, the daily meetings at the local senior center, The Stanford House, Sunday’s at her church, Temple Baptist and the time she spent with her best friend, Pearlene Sappington. Irene’s health began to fail in 2016, so she relocated to Redstone Park in Brownwood to be near her nephew and his family. She enjoyed attending church with them at Rocky Creek Baptist. The loved ones left to cherish the sweet memories of Irene include the one she considered her daughter, Betty Ellis (her nephew’s wife); niece and nephews she considered grandchildren, Debbie (Ellis) Harris and husband, Jeff; Zac Ellis; Brennan Harris & wife, Kylee and Colton Harris. She is also survived by other nieces and nephews and a host of friends. Irene was preceded in death by her parents; her husband; her nephew and caregiver, Jimmie Ellis; her sister, Catherine Ellis Wyatt; her brothers, John H. Ellis, Jr, Plas J. Ellis, and James ‘Bill’ Osborn; half-brother, J.T. Ellis; half-sisters, Birdie Ellis, Edna ‘Eddie’ Ellis Turner, and Esther Ellis Markham. Online condolences, tributes and memorials can be shared with family at www.heartlandfuneralhome.net

The family of Irene E. Ashcraft created this Life Tributes page to make it easy to share your memories.

Send flowers to the Ashcraft family.