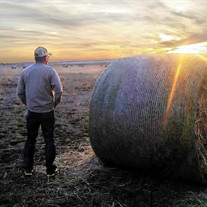 On Friday, January 21, 2022, Kirk Cavanaugh, of South Coleman County, a loving husband, father, brother, and Da, went to be with the Lord at age 61. Jackie "Kirk" Cavanaugh was born on November 22, 1960, in Lamesa, TX to Jackie Cavanaugh and Nancy (Adian) Cavanaugh, the fourth out of five children, the family soon moved to Coleman, where Kirk attended the Coleman schools and was part of the Class of 1979 and member of the First Baptist Church. On September 16, 1978, he married the love of his life and best friend, Lisa Mae (Krischke) Cavanaugh together they raised two children a son, Cody, and a daughter, Chelsea. At a young age Kirk continued his parents dedicated work ethic starting when he was a boy working on his family's farm, to working at the tile plant and feed store through high school, becoming a driller on an oil rig by the age of 19 where he worked for many years during this time while working 16 hour days he built a beautiful home for his family after they lost theirs to a fire, in the early 90s when the oil field slowed down he began his career in road construction where in no time they noticed his hard work, attention to detail, and the pride he took on every job he completed he became a Project Superintendent where he was highly respected by his coworkers. In 2008 they bought their family farm where Kirk returned to his true passion of raising cattle and started Broken Road Beefmasters where you could usually find him out working cattle with his family or sitting up on the hill overlooking their property and cows. The job Kirk was most proud of was being Da. He loved his guy gang that he had with his two grandsons Hagen Dirk and Brayden Kirk more than anything else from sporting events cheering Hagen on or supporting Brayden in his robotics and future problem solving competitions he loved his boys and he was so proud of them he enjoyed spending all the time he could with his family. He is preceded in death by his parents Nancy and Jackie Cavanaugh, a brother Keith Cavanaugh, a sister Kimberley Cavanaugh. He leaves behind wife Lisa Cavanaugh, son Cody Cavanaugh, daughter Chelsea Cavanaugh, grandsons Hagen Dirk and Brayden Kirk Cavanaugh, a brother Kevin Cavanaugh, a sister Kayla Wallace. He will be greatly missed by his family, extended family, Reece Albert and CSA work family, Beefmaster family, and many friends. Arrangementsare under the direction of Heartland Funeral Home in Early. Donations in Kirks name can be made to Coleman Booster Club or Early Middle School Future Problem Solvers (7th Grade). A private memorial will be held in the spring at Broken Road Ranch.

On Friday, January 21, 2022, Kirk Cavanaugh, of South Coleman County, a loving husband, father, brother, and Da, went to be with the Lord at age 61. Jackie "Kirk" Cavanaugh was born on November 22, 1960, in Lamesa, TX to Jackie Cavanaugh... View Obituary & Service Information

The family of Kirk Cavanaugh created this Life Tributes page to make it easy to share your memories.

Send flowers to the Cavanaugh family.