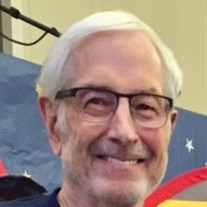 James Farris Bailey, Jr. passed away on Wednesday, July 14, 2021 at the age of 83. Jim, with his wife Sonya, lived in Brownwood, Texas since June of 1972. They were high school sweethearts and she was the love of his life. They were married 63 years. Jim was born February 16, 1938 in Brazil, Indiana to James and Eileen Bailey, the oldest of four boys (Jim, David, Tom and Dennis). His family moved to Chicago, Illinois in 1939 and then to Mineral Wells, Texas in December of 1946. Jim graduated from Mineral Wells High School in 1956 and Texas Tech University with a BBA in Accounting in 1961. Jim worked 9 years at Peat, Marwick, Mitchell & Co, C.P.A.s in Ft. Worth, Texas, 2 years at Western Company of North America, Inc. in Ft. Worth, Texas, 17 years at Woodson Newspaper, Inc. in Brownwood, Texas, and 18 years at Krischke and Company C.P.A.s in Brownwood, Texas. He became a Certified Public Accountant in 1969 and was a member of both the Texas Society of Certified Public Accountants and the American Institute of Certified Public Accountants. A committed follower of Jesus Christ, Jim was baptized on January 15, 1965. He was a member of the Austin Avenue Church of Christ since 1972 and served as an elder from 1985-2014. Jim was a member of the Brownwood Rotary Club and served several terms as its treasurer. He was also a member of the Board of Downtown Brownwood, Inc.. In July 1997 he was appointed Receiver of the Brown County Museum of History by the District Court, an appointment that allowed for the further growth and organization of the museum. He served on its Board of Directors (several terms as an officer) and on the Brownwood Library Board. He also served as the treasurer of the Texas Limousin Association. Jim was an avid stamp collector and enjoyed being a member of: -The Mid-Cities Stamp Club -American Philatelic Society -Texas Philatelic Society -Collectors of Religion On Stamps - American Topical Association - International Society of Worldwide Stamp Collectors And a Founding member of the Mourning Stamps and Covers Club He served as the Secretary for the Collectors of Religion On Stamps and Mourning Stamps and Covers Club. Jim is survived by his wife Sonya, his son Greg Bailey and wife Melanie, his daughter Amy Bond and husband Glen, his daughter Angi Roberts and husband Randy; 11 grandchildren - Amber Januse and husband Jeff, Afton Noel and husband Jackson, Haden Roberts and wife Jessie, Lexi Jaquet and husband Bobby, Jessica Ross and husband Nathan, Faith Todd and husband Tony, Tristan Roberts, Hope Bailey, Halle Roberts, James Bailey and Katy Bailey; 9 great grandchildren - Parker, Sawyer, Jayde and Olyvia Januse, Dean and Hayes Roberts, Emmi Jaquet, and Harper and Ezra Ross. As well as 3 brothers: David, Tom and Dennis Bailey. There is nothing more that Jim loved than spending time with his family, but he also enjoyed his cattle, gardening, stamp collecting, books, birds, puzzles and traveling. Visitation with family will be held at Heartland Funeral Home, Sunday, July 18, 2021 from 5:00 pm - 7:00 pm. Funeral services will be held at Austin Avenue Church of Christ, Brownwood, Texas on Monday, July 19, 2021 at 10:00 am, burial to follow at Eastlawn Cemetery, Early Texas.

James Farris Bailey, Jr. passed away on Wednesday, July 14, 2021 at the age of 83. Jim, with his wife Sonya, lived in Brownwood, Texas since June of 1972. They were high school sweethearts and she was the love of his life. They were married... View Obituary & Service Information

The family of Jim Bailey created this Life Tributes page to make it easy to share your memories.

Send flowers to the Bailey family.