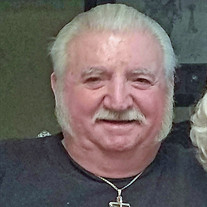 James Ronnie Clemons was born September 26, 1949 in Haskell, Texas and passed from this world to his Heavenly Home on May 26, 2021. James Ronnie Clemons was 71 years, and 8 months old. Ronnie had been ill for quite a while after covid. He never fully recovered. They were active members of the Freedom Fellowship Church of Early. They were a big part of the church's family. Ronnie was proud to be a part of the Men's Bible group. James Ronnie Clemons was of Early, but was raised in the Stanford area. Ronnie was born to Ray and Doris Clemons. James Ronnie graduated in the top of his class at Dallas Institute of Funeral Service in 1989. He drove trucks most of his life and always had diesel in his blood. Ronnie didn't name towns as he crossed the countryside, but by, "the best place to eat." He was a pilot escort for oversize loads and owner of Cherokee Pilot Service. James Ronnie was also owner and creator of the famous "hot" hot sauce called Cherokee Revenge. Ronnie loved to fish, play guitars and also, he loved to cook. (He even recently made a Black Forest Cake and took it to his doctor and nurse recently at Comanche Hospital.) Later in his life, Ronnie was a witness for Christ & His Kingdom everywhere he went. When Ronnie gave his life to God, it totally changed him. He invited everyone to come visit his church and asked if they knew his God. He is so happy to finally be home! Ronnie is survived by his wife, Shirley Clemons of Early; four children, Penny Clemons and husband Chuck Horn of Arlington, Scott Clemons of Palestine, Michelle Raygo and husband Johnny of Cedar Park, and Angela Zigarlick and husband Ken of Spokane, Washington; two sisters, Carlotta "Charlie" Arthur and husband Frank of Brownwood, and Karen Matthews and husband Charles of Seven Points. He is also survived by seven granddaughters, five grandsons, and one great-granddaughter. He was preceded in death by his parents, Ray and Doris Clemons; grandparents, Dee and Viola Holcombe, and his daughter, Janice Richardson.

The family of James Ronnie Clemons created this Life Tributes page to make it easy to share your memories.

Send flowers to the Clemons family.