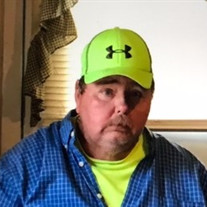 James Earl Richard, 60, of San Angelo passed away Friday, May 29, 2020. A Memorial service will be held at Haven of Hope, 1617 Main Blvd, Brownwood, TX 76801 at 3 PM Saturday, June 13, 2020 with burial to follow at the Jenkins Springs Cemetery. James was born April 8, 1960 in Lubbock, Texas to Walter and Lora Mae Richard. James eventually found himself in Early where he graduated high school. James lived in the Brownwood area a large portion of his life working in construction. He could do just about any kind of construction, but his cabinetry work was absolutely beautiful. James was an artist. He loved to fish and camp but loved the boat races. James was close to all of his nieces and nephews but was especially close to his grandson Kobe. He always looked to future events where all the family would get together and he could barbecue for everyone. James is survived by his companion, Michele Bradford of San Angelo; grandson, Kobe Thompson; Michele’s children, Michael Bradford of San Angelo & Meghan Day of Paris, Texas; sisters, Beverly Smith of Brownwood, Johnna Dillard and husband Steve of Zephyr, Mary Coleman and companion Ernest Willburn Jr. of Brownwood, and Deborah Tyler of Early; uncle, Robert Richard and wife Bonnie of Soldotna, Alaska and aunt, Ann Cooley of Early; several nieces, nephews and friends. James will forever be missed by his emotional support dog and furry friend, Sally. James was preceded in death by his parents; brother, Michael Richard; uncle, James Cooley Sr.; nephews, Brandon Dillard, Matthew Smith, Troy Lawson; and niece, Angela New. Condolences, tributes and memorials can be given to family at www.heartlandfuneralhome.net

The family of James Earl Richard created this Life Tributes page to make it easy to share your memories.

James Earl Richard, 60, of San Angelo passed away Friday, May...

Send flowers to the Richard family.