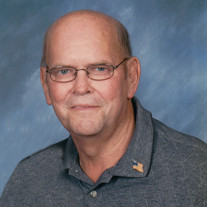 James Douglas Rogers, 78 of Brownwood passed away on Friday, February 5, 2021.   Doug was born Wednesday, April 8, 1942 at Ranger General Hospital to J D Rogers and Naomi Weekes.  He attended and graduated from Ranger High School in 1960 and went on to attend Texas Tech until he was drafted into the United States Navy. Doug married Sharon Brown on July 4, 1970 at Mesquite & Rusk Church of Christ and began a life together that blessed them with 3 children.  Doug coached his oldest son’s baseball team and then he coached the U10 soccer team with his oldest son again.  He did not know anything about the game in the beginning.  Morris Horton and Doug took this team to the Championship game in Dallas and won.  Doug loved watching his own kids in their sporting events like basketball, baseball, gymnastics, football, track, and cheerleading.  Work would sometimes interfere.  When he retired, he tried hard not to miss any of his grandchildren’s activities.  That was the delight in his retirement life.  He loved his grands immensely. Doug loved his profession as a market guy.  He started out with JRB’s in 1971.  He ended up as a market supervisor before Mr. Beadel sold out.  Then he was one of the vice-presidents of Sav-On Food.  This man never knew anything but hard work as he raised a peanut crop at the age of 10. He was the president of the Lions Booster Club from 1988-1990, Kiwanis Club, and Rotarian member, former Deacon at Ranger Mesquite and Rusk Church of Christ and Austin Avenue Church of Christ. Doug was always volunteering. He loved to cook and was volunteering to cook briskets for church especially, but also youth activities.  Barbequing was his passion.  He never regretted his service time.  When asked after he became so ill about his service time, he would reply, “I’d do it again, we saved a lot of lives.” Doug is survived by his wife Sharon Rogers of Brownwood; sons, Scott Rogers and wife Liisa of Prosper and Jeffrey Rogers of Nederland; daughter Jennifer Hutchins and husband Brent of Bangs; mother-in-law Salata Brown of Ranger; 5 grandchildren, Skylar, Raylee and Hunter Hutchins, Cooper and Dylan Rogers; several nieces, nephews and cousins. He is preceded in death by his parents, J.D. and Naomi Rogers; brothers, David Rogers and Dwight Rogers. His family would like to send a special thank you, to all his doctors, nurses, home health, and others who gave him the best of care and loved him.  The family does not have enough words to say about the care and love that was shown to Doug from Hendricks North, Hendricks South, Dallas Methodist, and Brownwood Regional Medical Center. In Lieu of flowers the family request that donations be made to the, Alameda Cemetery Association P.O.Box 412, Rangers, Texas 76470 or Austin Avenue Church of Christ Youth Group, 1020 Austin Ave. Brownwood, Texas 76801.

James Douglas Rogers, 78 of Brownwood passed away on Friday, February 5, 2021.   Doug was born Wednesday, April 8, 1942 at Ranger General Hospital to J D Rogers and Naomi Weekes.  He attended and graduated from Ranger High School in 1960 and... View Obituary & Service Information

The family of Doug Rogers created this Life Tributes page to make it easy to share your memories.

James Douglas Rogers, 78 of Brownwood passed away on Friday,...

Send flowers to the Rogers family.