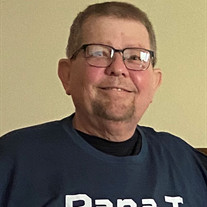 James Keith Taylor, age 65, Texas Tech Red Raider, Teacher, Robotics Fanatic, son, husband, dad, and Proud Papa T, passed away on Tuesday, June 30. Keith was born October 12 in New Mexico to James and Nita Taylor. He proudly received his Bachelor’s and Master’s degrees from Texas Tech University and was a proud member of the Goin’ Band from Raider Land. Keith and his wife, Vivian, recently celebrated 38 years of marriage and raised three sons: Andrew, Scott, and Justin. God called him to the mission field of teaching for over 40 years. Keith had a passion for education and influenced many students in Pecos Barstow Toyah ISD, Early ISD, and Cross Classical Academy schools. He enjoyed coaching robotics, driving the bus, especially for the Early High School Band, and teaching 4th grade science. Keith loved to instill a wonder and awe about God’s creation in his students, and took joy in having star gazing parties and sharing his telescope. He treasured his church family at Early First Baptist Church where he served in many areas of ministry. Keith had an enthusiasm for life and brightened the lives of many. His love of the Lord exemplified his legacy of excellence and Christian faith that has impacted the lives of anyone he was around. “In my weakness, He is strong.” 2 Corinthians 12:9-10 Keith was preceded in death by his grandparents and other close relatives. Those left behind to cherish his memories are his wife, Vivian Taylor; children, Andrew and Shelbi Taylor, Scott Taylor, Justin and Janna Taylor; his grandchildren, Oliver, Milo, and Charlie Taylor; his parents, James and Nita Taylor, sisters, Brenda Taylor Boggs and Becca and husband Rick Bryan; mother-in-law, Mary Ball; sister-in-law and brother-in-law, Alan and Lucretia Harden; as well as nieces, nephews, great nieces, great nephews and numerous aunts, uncles, and cousins. In lieu of flowers, the family has formed the James Keith Taylor Memorial Scholarship Fund at MC Bank, 411 Early Blvd, Early, TX 76803.

The family of James Keith Taylor created this Life Tributes page to make it easy to share your memories.

Send flowers to the Taylor family.