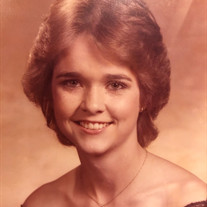 Jana was born April 18, 1966 in Carlsbad, New Mexico to Trent and Sherlene Kirkes. Jana grew up in Carlsbad, NM. She graduated high school early so she could marry her high school sweetheart, James Strawbridge on March 30, 1984. Jana and James moved several times following a Navy career. Thereafter, they made their home and raised their children for 27 years in Odessa, TX. She and James retired to their retreat in Comanche, TX where they have lived for the past 2 years. Jana lived her life to the fullest and surrounded herself with those she loved. She was fiercely protective, staunchly loyal, and she never left you guessing about how she felt. Her family was her everything. Jana and James were devoted to one another for 36 short years, a true love story for the books. Their banter was endless. She kept him in line while, at the same time, was his biggest supporter. Jana never held back when it came to putting the pedal to the metal. She thoroughly enjoyed going fast and had several ways to do it – motorcycles and Mustangs. She was particularly fond of her mom’s German chocolate cake, Cherry Limeades and spaghetti. She also never met a Mr. Goodbar she didn’t like. Jana was an avid reader. When her kids were younger, she hid in the bathroom to finish “one more chapter.” She regularly made trips to Half Price Books and came home with boxes of books; bags didn’t cut it. Moving to Kindle was a real space saver. She also taught herself to do anything that would make her kids happy. She baked the best chocolate chip cookies, became a softball catcher and created the most fun bedrooms – solar systems and superheroes. Nothing eluded her. Her grandkids lovingly refer to her as “Momo,” but really, she was their hero. Planning adventures was her forte – trips to the zoo, riding horses and climbing the biggest dirt piles. The skies were the limit where they were involved. Jana also loved her animals. Her dogs, Doc and Murphy were her Boys. They completed her circle, and, in return, they absolutely adored her. When she wasn’t in the house, you could find her in her favorite spot – the fields with her boys. Jana will be missed, but her legacy and her spirit will live on through her children and her grandchildren. Every time it rains, we’ll think of her. Cheers to you my wife, my daughter, my momma, my momo. You’ll be in our hearts forever. Jana is survived by her parents, Trent and Sherlene Kirkes; her siblings, Jeff and Nina; her husband, James; her children, Brandi and Bryon; grandchildren, Easton and Maddie.

Jana was born April 18, 1966 in Carlsbad, New Mexico to Trent and Sherlene Kirkes. Jana grew up in Carlsbad, NM. She graduated high school early so she could marry her high school sweetheart, James Strawbridge on March 30, 1984. Jana and James... View Obituary & Service Information

The family of Jana Strawbridge created this Life Tributes page to make it easy to share your memories.

Send flowers to the Strawbridge family.