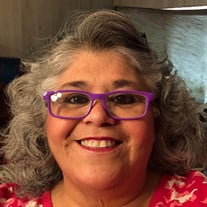 Jane Esther (Treviño) Jones, 64, of Early, Texas went home to be with her Heavenly Father on January 16th, 2022. Visitation will be held at Heartland Funeral Home from 6:00 - 8:00 PM, Friday, January 21, 2022. The Celebration of Life ceremony will be held in the Heartland Funeral Home Chapel at 10:00 AM, Saturday, January 22, 2022. Jane Treviño Jones was born on April 22, 1957 in San Antonio, Texas. She graduated from Phyllis Wheatley High School and received her Bachelors' degree from Howard Payne University in Brownwood, Texas. It is in Brownwood where she met the love of her life, Charles Jones. They were married in 1983, and 1 year later they welcomed their 1st child. Two sets of twins later and they had a bundle of 5 children! Jane's love for her husband and children only came second to her love and devotion to Christ. A devout Christian, Jane was a member of Milton Ave Baptist Church in her early years in Brownwood and later Nueva Vista Baptist Church. Jane spent most of her career devoted to her students at Blanket ISD where she taught Spanish. A woman who had one of the most infectious smiles brought laughter and joy where ever she went. Jane had no problem making friends all over town. She loved to dance to her disco music and tend to her plants; this brought her great joy. Her grandchildren were the light of her life in her later years and brought her such joy. She would never miss an opportunity to tell someone about them. Jane is survived by her love and husband Charles Jones from Early, TX; eldest daughter Ashley Hernandez (husband Hugo) from Cleveland, TX, twins Jonathan Jones (wife Ashley) of Brownwood, TX, Jessica Bailey (husband Benjamin) of Cleveland, TX, second set of twins Stephen Jones of Early, TX, Sara Ruiz (wife Lindi) of San Antonio, TX. Her grandchildren Byron, Joseph, Violet and baby Bailey along with her 4 sisters and 3 brothers. Jane was preceded in death by her parents, Jesse and Juanita Treviño and brother Alfred Treviño. Online condolences, tributes and memorials can be shared with the family at www.heartlandfuneralhome.net

Jane Esther (Treviño) Jones, 64, of Early, Texas went home to be with her Heavenly Father on January 16th, 2022. Visitation will be held at Heartland Funeral Home from 6:00 - 8:00 PM, Friday, January 21, 2022. The Celebration of Life ceremony... View Obituary & Service Information

The family of Jane Trevino Jones created this Life Tributes page to make it easy to share your memories.

Send flowers to the Jones family.