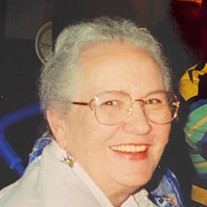 Janet Ruth Goddard James went to join her Heavenly Father at the age of 89 on April 18, 2021. She was born to John R. Goddard and Jane O'Neil Goddard in St. Louis, Missouri on December 29, 1931. She was a big City girl who grew up in St. Louis. As a little girl she would hop on the bus and go everywhere. Forest Park. Sportsman's Park. She and her family loved the St. Louis Cardinals. The family moved to Hobbs, New Mexico in 1948 before the start of her Senior year at Hobbs High School. Upon her graduation in 1949 she met a handsome, young, former soldier named Clifton Ray James. The two were married in Hobbs on September 9, 1949. He had a job with El Paso Natural Gas and the City girl began her life with him in Southeastern New Mexico in a little bitty place called Oil Center. They lived along the company's pipelines in such places as Jal, New Mexico, Midkiff, Texas, Navajo Station, Arizona, Deming, New Mexico and back to Oil Center, New Mexico. Then they went to Algeria in North Africa for three years. They got to travel extensively in Europe in those years. Nana loved to dance with Pa to country music. Nana was always ebullient. She could be feisty too. She could make a friend anywhere. In line at the grocery store. Waiting tables. On an airplane. When the President of Algeria visited the EPNG Plant one day, Nana spontaneously made coffee and served it to his security detail. Nana went on a lot of camping trips for a City girl. In the Mountains. Hunting. Fishing. Waterskiing. At the lakes. Fifth wheel trips. Nana always said she raised four boys. She included Pa in that count. Michael Ray was born on February 16, 1951 in Andrews, Texas. Steven Clifton was born on January 23, 1953 in Hobbs, New Mexico. Timothy Lee was born on September 13, 1955 in Big Lake, Texas. When Nana and Pa reached retirement in 1983 they moved to Comanche, Texas and put a double-wide trailer on a 10 acre piece of land a few miles from Proctor Lake. They found great happiness in Comanche. They both made a ton of friends. They ran the James Trophy House. In late 1995 Nana's Father passed away, followed a few months later by her Mother. In May 1996 her beloved Husband, Pa, passed away. She would not suffer such a blow again until in May 2011 when her Son, Tim, passed away. In the interim she was an established, well-known person in Comanche working at the Cafe on the square. She was nationally known in Al-Anon and Friend to Friend. She was a member of the Methodist Church. Nana loved her grandchildren and they loved her. She was blessed with 15. Mike had Kristi, Jared, Evan and Aaron. Steve had Seth, Sarah and Naomi. Tim had Tobie, Kaycee, Ryan, Ashley, Sara, Logan, Tanner and Nick. All but Tanner survived. Nana also had 20 wonderful great grandchildren and 1 great, great grandchild. She is also survived by her Sister, Anne, Mike (Peggy), Steve and Tim's Wife, Kim. Not to forget the other former daughters-in-law that she loved, Becky, Gayle, Robin, Kellie, Yvette and Janie. Her Brother, Johnny, passed away before Nana. Visitation will be Saturday April 24, 2021 from 10:00 am to noon at Heartland Funeral Home at 1508 N. Austin St. in Comanche, Texas. Nana's funeral service will be at 2:00 pm on the same day in Comanche, Texas at the First United Methodist Church located at 217 E. Grand, with the Pastor Rick Mang officiating, with the graveside service shortly thereafter. Be assured, after a life well lived, Nana is up there in the big City of Heaven and she already has made a bunch of new friends. Somewhere, a bell is ringing.

Janet Ruth Goddard James went to join her Heavenly Father at the age of 89 on April 18, 2021. She was born to John R. Goddard and Jane O'Neil Goddard in St. Louis, Missouri on December 29, 1931. She was a big City girl who grew up in St. Louis.... View Obituary & Service Information

The family of Janet R. James created this Life Tributes page to make it easy to share your memories.

Send flowers to the James family.