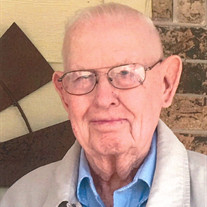 Jay Lloyd Rankin, 93 of Early went home to be with his Lord and Savior, November 8, 2021. Jay was born December 5, 1927 to Samuel LaFayette Rankin and Nettie Lee Rankin in Brown County. He married Ernestine Vandivere on May 22, 1948. They celebrated their 73rd Wedding Anniversary this past May. Dad always said when he asked Ernestine for a date that he knew she was the girl for him, but Mom says she had her eye on him for years. They were blessed with three children. In 1951 Jay and his family moved to Odessa and he worked for 11 years for Sunset Motor Freight. In 1962 he bought a farm and the family moved to Eastland County near the community of Pioneer. He loved farming and raising cattle and he worked many other jobs during his life to provide for his family. He was an avid fisherman and loved to deer hunt in the fall. Jay was a member of Pioneer Baptist Church for over 40 years. Jay and Ernestine retired in 2007 and moved to Early. Jay was a member of Early First Baptist Church and a member of the Friendship Sunday School Class. Jay was preceded in death by his mother and father; three brothers, Coy Rankin, Bill Rankin, and Ray Rankin; two sisters, Gaynell Nelms and June Rankin; sisters-in-laws, Jewel Rankin, Irene Rankin, Charlene Hines; and brothers-in-laws, Marvin Hines, Garvin Sumner, Shelby Vandivere and Willie Vandivere. He is survived by his wife, Ernestine; son Gene Rankin and wife Viana of Clyde; daughters, Laquetta Rankin and Mary Rankin of Early; grandsons, Rob Walker and wife Shelley of Lubbock, Sean Rankin and wife Jennifer of Lake Brownwood; five great grandchildren and four great-great grandchildren; sisters, Wanda Sumner of Hillsboro, Ruth Mouring and husband Bob of Marysville, Tennessee, Betty Barnhill and husband Billy of Georgetown; sister-in-laws, Georgia Vandivere of Houston, Sue Vandivere of Rising Star, Nadine Pilcher and husband Jack of San Angelo; and numerous nieces and nephews. The family extends a special thank you to Solaris Hospice of Brownwood and Oak Ridge Manor of Brownwood for the wonderful care you gave to Jay.

Jay Lloyd Rankin, 93 of Early went home to be with his Lord and Savior, November 8, 2021. Jay was born December 5, 1927 to Samuel LaFayette Rankin and Nettie Lee Rankin in Brown County. He married Ernestine Vandivere on May 22, 1948. They celebrated... View Obituary & Service Information

The family of Jay L. Rankin created this Life Tributes page to make it easy to share your memories.

Jay Lloyd Rankin, 93 of Early went home to be with his Lord and...

Send flowers to the Rankin family.