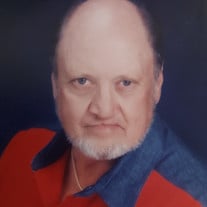 Jerry Francis Burnett, 78, of May, Texas passed away March 20, 2022. A visitation with family will be held, Tuesday, March 22, 2022 from 6:00 to 8:00 PM at Heartland Funeral Home in Early, Texas. The Funeral Service will be held at the First Baptist Church in May, Texas Wednesday, March 23, 2022 at 10:00 AM with interment to follow in the May Cemetery, May, Texas with Don Longoria officiating. Jerry was born November 10, 1943 in Brownwood, Texas to Edgar and Viva Lemaster Burnett. He graduated from May High School and became a Master Plumber who was known for being a fabulous plumber for Earl Deen Plumbing many years before becoming the plumbing inspector for the city of Brownwood. Jerry was blessed with 3 children from his first marriage and when he married Alberta "Birdy" Davila, he was blessed with four more children who only knew him as Dad. Jerry and Birdy were married in 1990 and got to spend over 30 years together. He was a member of the First Baptist church in May, Texas. Jerry was loved by all who knew him. He was soft spoken and lived simple, loved Jesus and his family, in that order and always said "I love you" to the people who were blessed enough to be in that category. He loved fishing and hunting and in the earlier years, loved to play "42" with his brothers and sisters. After retirement, he would do an occasional inspection for surrounding communities but mostly he enjoyed watching his shows like Judge Judy and Naked and Afraid. Jerry had a big heart, a great sense of humor and would give you anything he had even if it meant going without himself. Those who loved him are better for it and he will be missed though we rejoice in his new life in heaven. Jerry is survived by his wife, Alberta Burnett of May, Texas; sons, Bobby Burnett and wife Becky of San Angelo, Terry Burnett and wife, Holly of Horseshoe Bay and Effrin Reyna of May; Daughters, Debbie Keller and husband Brad of Lake St. Louis, MO, Monica Donham and husband, Michael of Santa Anna, Evon Lusk and husband Britt of Pilot Point, Texas, Melissa Reyna and fiancé Dusty Hatchett of Brownwood; brother, Ira Lee Burnett and wife Cynthia of Waco; 11 grandchildren; 3 great grandchildren; and many nieces, nephews and friends. Jerry was preceded in death by his parents, Edgar and Viva Burnett; sisters, Avanell Stewart, Eloise Hopper, Cozette Oaks, Inez Franklin; and brothers, Ed Burnett, Howard Burnett, and Morris Burnett. Online condolences, tributes and memorials can be shared with the family at www.heartlandfuneralhome.net

Jerry Francis Burnett, 78, of May, Texas passed away March 20, 2022. A visitation with family will be held, Tuesday, March 22, 2022 from 6:00 to 8:00 PM at Heartland Funeral Home in Early, Texas. The Funeral Service will be held at the First... View Obituary & Service Information

The family of Jerry Burnett created this Life Tributes page to make it easy to share your memories.

Send flowers to the Burnett family.