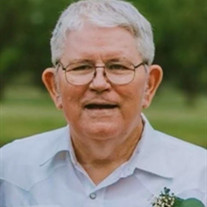 Jerry Uzell Roberts, Sr. of Bangs, died on Wednesday, August 11, 2021 at the age of 75 in Abilene. Jerry was born on April 27, 1946 to Leach Bob and Estelle Daylong Roberts in Coleman. He was the middle child to 11 brothers and sisters. Jerry grew up in Flat, Texas, a small neighborhood in Gatesville, with his family who was involved in the oil and gas industry. As a child, they did their fair share of traveling, as they were always following where the oil would take them. After his time in the oil business, Jerry became and machinist, and later a supervisor at FMC. Jerry raised three children in Bangs- two sons, and one daughter. He married Connie Chrane on June 17, 1983, and gained another son. Jerry loved to stay busy. Some of his favorite past-times included fishing, gardening, cooking, and tinkering with welding and guns. Jerry did his fair share of reading, and you would frequently catch him reading his bible in his recliner. He also enjoyed spending time with his beloved wife, children, grandchildren and his great-grandchildren. Jerry is survived by his wife, Connie Roberts of Bangs; son, Jerry Roberts Jr. and wife, Teresa, of Bangs; son, Jackie Roberts and wife, Tammy Roberts of Brownwood; Step-Son, Roger Sparks and wife Angela of Bangs; Grandson Tyler Roberts and wife, Phylli, of Crawford, OK; Grandson Jayton Roberts of Brownwood; Granddaughter, Brittany King and husband, KJ, of Blanket; Grandson Taylor Roberts of Bangs; Granddaughter Jobi Blacketer and husband, Beau, of Bangs; Granddaughter Baylie Beckwith and husband, Jacob, of San Angelo; Granddaughter Jaylee Newton and husband, JT, of Bangs; Grandson Gannon Sparks of McKinney; Grandson Monte McClure and wife, Morgan, of Bangs; and Grandson Cohl McClure and wife, Katy, of Abilene; 9 great-grandchildren; Sister, Wanda Bishop; and Brothers, Royce and Ronnie Roberts. Jerry was preceded in death by his daughter, Jennifer Newton; grandson, Matthew Trey Newton; parents, Leach and Estelle Roberts; seven siblings and many other distant family members. A graveside service will be held on Thursday, August 19, 2021 at 10:00 am at Bangs Cemetery. A public memorial service will be held at a later date and will be announced by the family when more information is available. Please contact Heartland Funeral Home for more information.

Jerry Uzell Roberts, Sr. of Bangs, died on Wednesday, August 11, 2021 at the age of 75 in Abilene. Jerry was born on April 27, 1946 to Leach Bob and Estelle Daylong Roberts in Coleman. He was the middle child to 11 brothers and sisters. Jerry... View Obituary & Service Information

The family of Jerry U. Roberts created this Life Tributes page to make it easy to share your memories.

Send flowers to the Roberts family.