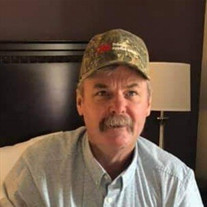 Jesse Dean Goodwin, 60, of Blanco formerly of Brownwood, Texas, passed away, Monday, January 17, 2022. A Celebration of Life service will be held at 2:00 PM, Friday, January 28, 2022 in the Heartland Funeral Home Chapel with Mark Towns officiating. Jesse was born in Coleman, Texas on November 15, 1961 to Aubrey and Carolyn Goodwin, the 4th of 5 boys. He learned his future career in road construction by working alongside his father and brothers. He attended schools in Brownwood, Snyder and Ira and was active in FFA. After High School, Jesse worked in the oilfield in Odessa before moving back to Brownwood. He married Nina Hamilton on September 1st, 1983 and welcomed 2 sons, Jason and Cade. Jesse loved his family very much and was the favorite Uncle Jesse to his nieces and nephews. After a move to the Hill Country, Jesse spent as much time as he could with Jason and Cade. He attended as many sporting events as work would allow from Little League to varsity. The boys began showing pigs and steers and Jesse loved taking the boys to buy their stock. Many hours were spent in the home barn and show barns at the prospect and local level to the major Stock Shows. Jesse would haul other kid's pigs and steers to the shows and was always willing to help anyone, earning him the nickname "Steer Jockey Jesse." Jesse loved all the grandchildren and spending time with them. Once Sarah was old enough, he face-timed with her once a week. It was a special blessing having Gus and Annie at the house this past year. He looked forward to napping with Gus and rocking him when he got in from work, shopping with Annie or just hanging out at the house with her brought him such joy. Jesse was a friend to many and never hesitated to help someone when they called. Jesse is survived by his wife, Nina Goodwin of Blanco; son, Jason Goodwin and wife Olivia of Blanco; daughter-in-love, Samantha of Brownwood; brothers, Steve and wife Brenda of Brownwood, Terry and wife Tina of Bangs, Ray and wife, Cindee of Early, David and wife LaDonna of Brownwood; granddaughters, Annie of Blanco, Ellie, Gracie & AJ of Sharon Springs, Kansas, Sarah of Brownwood; grandsons, Eli of Sharon Springs, Kanas, Gus of Blanco; and numerous cousins, nieces, nephews and friends. Jesse was preceded in death by his father, Aubrey Ray Goodwin and mother, Mildred Carolyn Goodwin; and son, Cade Goodwin. Online condolences, tributes and memorials can be shared with the family at www.heartlandfuneralhome.net

The family of Jesse Dean Goodwin created this Life Tributes page to make it easy to share your memories.

Send flowers to the Goodwin family.