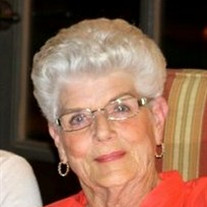 Mrs. Jewel Elkins passed peacefully from this life and entered Heaven on September 06, 2020. A visitation is planned from 6:00 – 8:00 PM, Tuesday, September 8, 2020 at Heartland Funeral Home and the funeral service will be held at 2:00 PM, Wednesday, September 9, 2020 in the Heartland Funeral Home Chapel with interment at Bangs Cemetery. Jewel was born in Bangs, Texas, on April 21, 1930, the seventh child born to Mr. Leaman and Mrs. Zerelda Ferguson. She was raised on her family’s farm and worked at McClellan’s Five and Dime in the late 1940’s. It is at that store that she would meet the love of her life, a shy young man, Cecil, whom she would be married to for 66 years before his passing in 2017. Cecil and Jewel married in Yuma, Arizona, on March 10, 1951, while Cecil was serving in the US Navy. She was always the apple of Cecil’s eye. Cecil and Jewel were blessed with three children. Jewel spent her career working at Mid Tex Federal Credit Union and then at Brownwood Independent School District as an assistant to the Principals. Her family is proud of her many years of dedication and love as Cecil’s caregiving wife following his stroke in 1975. She was a quiet and dignified lady, graceful, and always poised. Jewel’s beauty was unmatched. She had many hobbies and interests that included playing softball on a Women’s League in Lampasas, horseshoes, 42 and Wahoo. She is remembered as a spitfire when playing games, with endless luck, and a zest for winning. She loved auctions and collecting antiques. She loved to garden, maintained a beautiful home and yard, and liked to sit and watch the birds. Also fondly known to her family as “Big Granny,” and was grandmother to Jennifer Ramirez (Pete), Stephanie Miller (Rex), Allison Beck, Melanie Bradshaw (Jeremy), Alicia Miller (Wes), Bradley Beck, Liam Elkins, and Brendan Elkins. Great grandchildren include Cheyanne, Jonathan, Alexus, Lasten, Torrey, Calvin, Ryan, Jayden, Samuel, Madyson, and Remi. Jewel also had two great-great grandchildren, JW and Lilly. Jewel was preceded in death by her parents; husband, Cecil; daughter, Diane Scott; infant brother, JL; sisters, Oneita, Thelma and Donnie; brothers, Tudd, Buster, and Lester Harold. Jewel is survived by daughter, Ronda Lovelady (Randal); son, Dana Elkins (Heidi); and her grandchildren, as well as her beloved sister-in-law, Sandra Looper. Memorial contributions can be made to Bangs Cemetery Association, PO Box 526, Bangs, TX 76823. Online condolences, memorials and tributes can be shared with the family at www.heartlandfuneralhome.net

The family of Jewel Elkins created this Life Tributes page to make it easy to share your memories.

Mrs. Jewel Elkins passed peacefully from this life and entered...

Send flowers to the Elkins family.