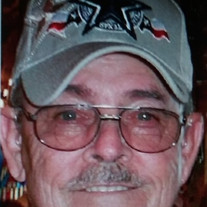 James “Jim” Stout, 81, of Early, passed away Tuesday, January 26, 2021. A visitation with family and friends will be held at Heartland Funeral Home from 4:00 – 6:00 PM, Saturday, February 6, 2021 and anyone who would like to share a personal story may do so. Jim was born in Crawfordsville, Indiana on February 5, 1939 to Donald and Mildred Stout. He was the second of four children, born to their union. Jim was in the Army from 1956 to 1962, part of his service was spent as a drill instructor. He had many talents, whatever job he undertook he did well. At one time he was a pilot, manager for Waffle House, Real Estate agent and an electrical contractor. Jim is survived by his wife of 41 years, Janet “Jan” Stout of Brownwood; daughters, Cathy Hamlett and husband Donald of Brownwood, Janet K. Sikes of Brownwood and Sally Robinson and husband Jerry of Tulsa; son, James Stout Jr. of Fredricksburg; 11 grandchildren and many great grandchildren, nieces, nephews and friends. Jim was preceded in death by his parents; older brother, Billy Don Stout; younger sister, Joyce Craft; and first wife who was the mother of his four children. Online condolences, tributes and memorials can be shared with the family at www.heartlandfuneralhome.net

The family of Jim Stout created this Life Tributes page to make it easy to share your memories.

Send flowers to the Stout family.