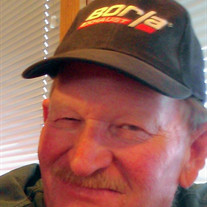 John Thomas Burroughs, 66, died peacefully surrounded by his loving family and his two constant furry companions on September 11, 2021 at his home in Brownwood, TX. The memorial service will be Saturday, September 25th, 1pm at Heartland Church of Brownwood. Donations may be made to Heartland Church in lieu of flowers. John came into this world on March 23, 1955 in Houston, TX, making two proud parents of Lee Roy and Lucille Burroughs. After playing high school football for the Levelland Lobos and working in Arizona for a year, John moved back to Levelland, where found his niche in the oil fields. He worked in oil fields all over Texas, and his knowledge of pump jacks was unsurpassed, eventually leading him to a supervisor position at Lufkin Industries. In 1985, he married Sherry Huddleston in Abilene TX and they began a lifetime of West Texas adventures together. John was a dad to Brandy, and later raised his granddaughters, Madison and Jessica, as daughters. John was fierce in his loyalty and commitment to family. A lifetime friend to so many that he encountered, Big John is remembered fondly for his big personality and his love for going fast (whether on a boat or Harley - and he had plenty during his lifetime). John is survived by his wife of 36 years, Sherry, daughter Brandy Beard of Odessa, and two granddaughters, Madison Beard and Jessica Beard, both of Brownwood, nephew Jordan Biandis of Mississippi. He is preceded in death by his father Lee Roy, mother Lucille and sister Paula.

John Thomas Burroughs, 66, died peacefully surrounded by his loving family and his two constant furry companions on September 11, 2021 at his home in Brownwood, TX. The memorial service will be Saturday, September 25th, 1pm at Heartland Church... View Obituary & Service Information

The family of John T. Burroughs created this Life Tributes page to make it easy to share your memories.

Send flowers to the Burroughs family.