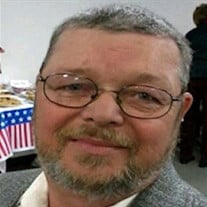 John Wesley Lawson, Sr., 53, of Brownwood, TX, passed peacefully from his earthly home to his eternal home on May 5, 2015 at the VA Olin Teague Hospital in Temple, TX. Funeral services will be held at 4:00 PM on Saturday, May 9, in the Netherton Funeral Home Chapel with Pastor Brian Hall officiating. Interment with Masonic Rites will be held at Cedar Point Cemetery under the direction of Netherton Funeral Home and Cremations. The family will receive friends Friday 6:00 to 8:00 p.m. at the funeral home. John Wesley Lawson was born on May 2, 1962 to Vada (Smith) Lawson and Foy Gene Lawson in Brownwood, Texas. He married Deborah Rogers on July 9, 2002 in Bangs Texas. John was a man of strong, Christian faith in his service to God. Over the years, he had served as a Sunday School Teacher, church board member, member of a church band, and as a Chaplain. He lived his life to bring a smile to everyone he met. He would never leave their presence before seeing them smile. To do that brought him great joy in his heart. John was a hugger and had such a tender heart for children. Sometimes, when interacting with a child, he was the bigger child, especially if he made those children smile and laugh. He shared with all, his great faith and belief in the redemptive power of Jesus. He never missed an opportunity. He walked and lived his faith, without question. He is where he wants to be. He really wanted to be in the second group when the trumpet sounded but he also knew he would more than likely hear his personal trumpet calling him home. Be happy for him and just a little bit jealous because he beat us there. Once we have won our race, at the Eastern Gate, with open arms, he will show us Jesus and the glorious wonders of Heaven. When John was in his battle with cancer all this past year, he never lost faith, but instead became stronger because of it. Not physically, but deep in his heart and soul. Yes, he was greatly loved and will be missed by those he had to leave behind. John touched many lives, sharing Christ’s love in word and action. He also showed us the strength of his character, integrity, tenacity, and faith. We were truly blessed to have had the opportunity to be touched by John’s love for everyone. John is where his heart longed for, to be with Jesus in eternity. John attended school in Brownwood, TX before trekking out on his own. He eventually joined the Army and showed us his patriotism to his county. He was with the 101st Airborne, Screaming Eagles. He actually completed his education while in the service of the Army. He then went on to college to receive an Associate Degree in Applied Science in Electronics. John was salutatorian of his class. He was invited to be a member of the International Society of Certified Electronic Technicians as well as a FCC licensed radio engineer. He served in with companies in Weatherford and Brownwood before settling into his service with Texas Communication/Mid-Tex Cellular for the major part of his working career. He was a Master Mason and was raised in 1999 and was also Past Worshipful Master of two lodges, Bangs 926 and Indian Creek 807. John was an active enthusiast in Amateur Radio, a member of Brownwood Amateur Radio Club, Certified Examiner through W5YI and ARRL. He was also involved with Skywarn, CERT, American Red Cross, MARS and ARES. Any capacity in hobby and emergency radio communication was his passion. He had a heart for his community and wanted to serve in any capacity he could in order to give back to his community. He was also a graduate of Brownwood’s very 1st Citizens Police Academy Class. John is survived by his wife, Debbie Lawson of Brownwood; son, John Wesley Lawson, II and wife Samantha of Brownwood; step children, Thomas Edwards Seils II and wife Melody of Gales Ferry CT, and Jessica Faith Kluka and husband Brad, of Baton Rouge LA; brother in law and “best buddy”, Bobby Rogers; step-mother, Earline Lawson of Abilene; brothers and sisters, Foy Arthur Lawson of Brownwood, Steve Lawson of Washington IA, Rosetta Watson and William of Lake Brownwood, Brenda “Crickett” Lawson of Brownwood, Jeanie Lee Bailey and Speedy of Clyde, James Lawson and Kassie of Rockland FL, Linda Casady of Abilene, Carol Bilbrey of Tahlequah, Oklahoma, and Earl Lawson and Terry, of Kentucky; grandchildren, Tyler Hashberger, Maia Seils, Edin Kluka, Mara Seils, Darci Kluka and John Wesley “Tripp” Lawson III. He is also survived by numerous nieces, nephews, aunts, uncles and cousins, numerous other family members and a host of friends. He was preceded in death by his father, Foy Eugene Lawson, his mother, Vada Smith Kelly, step-father, James Kelly and a sister, Lillian Earline Lawson. In lieu of flowers, donations may be made to one’s favorite charity. Family and friends are invited and encouraged to sign the online guestbook at www.nethertonfuneralhome.com

John Wesley Lawson, Sr., 53, of Brownwood, TX, passed peacefully from his earthly home to his eternal home on May 5, 2015 at the VA Olin Teague Hospital in Temple, TX. Funeral services will be held at 4:00 PM on Saturday, May 9, in the... View Obituary & Service Information

The family of John Wesley Lawson Sr created this Life Tributes page to make it easy to share your memories.

Send flowers to the Lawson family.