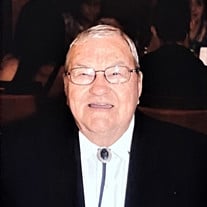 John Wilborn Mattix, age 83, of Bangs, was escorted home by his personal Lord and Savior, Jesus Christ, on August 12, 2021. John was born October 1, 1937, in Decatur, Texas and at age 19 became a "knight in shining armor" to his newly wedded wife. He and his high school sweetheart and apple of his eye, Phyllis Myers were joined in matrimony, May 30, 1956. They Lived, Loved and Laughed for 65 years as a fun-loving, adventurous, hardworking husband and wife team. Through this union, God blessed them with two daughters of which they began the life-long journey of teaching them the importance of Integrity, Honesty, Genuine Love, an Honest days work, Compassion, Honor, Kindness, and True Joy. John began his working career with the Safeway Stores in Fort Worth and eventually began working for Bell Helicopter in Hurst, Texas. When an opportunity came for them to move closer to his parents, they purchased the Kwik Shop Grocery and moved to Bangs, Texas in 1969. Through this venture, because it was only a block from the school, John and Phyllis had great influence on hundreds of kids, as the Kwik Shop was the "hang-out". Although these careers were fulfilling, he soon discovered that his passion in the working world was being the "Best Small Engine Repair Man" this side of the border. After 30 plus years of small engine repairs he retired. God blessed him with many talents: boat building, wood working, metal working, house building, engine repairing, and vehicle overhauls. He and Phyllis were adventurous right from the start, they were trick water skiers (even though Mom was afraid of the water), they loved to camp, grow a garden, collect antiques, travel, they enjoyed boating, fishing, hunting "the big ones" and hiking Colorado, vacations and get-togethers with family and friends, watching their grandbabies grow up, and just sitting on the patio drinking coffee. As he would often say: IT DOESN'T GET ANY BETTER THAN THIS John was a member of Grosvenor Baptist Church and dearly loved his church family. He believes his Salvation is a gift and cannot be earned. He is a believer in being washed by the Blood of Jesus Christ His Personal Lord and Savior, He believes in the Holy Trinity; God the Father, God the Son, and God The Holy Spirit, The Virgin Birth, Death, Burial and Resurrection of Jesus Christ. He lived by Matthew 6:1-4, 6 "Be careful not to practice your righteousness in front of others to be seen by them. If you do, you will have no reward from your Father in heaven. So when you give to the needy, do not announce it with trumpets, as the hypocrites do in the synagogues and on the streets, to be honored by others. Truly I tell you, they have received their reward in full. But when you give to the needy, do not let your left hand know what your right hand is doing, so that your giving may be in secret. Then your Father, who sees what is done in secret, will reward you". "But when you pray, go into your room, close the door and pray to your Father, who is unseen. Then your Father, who sees what is done in secret, will reward you". Those still here awaiting their HEAVENLY HOME GOING are, his wife and sweetheart of 65 years, Phyllis (Myers) Mattix; Daughter, Tina (Mattix) Goodwin and husband Terry; Daughter, Cheryl (Mattix) Barnum and husband David; Grand Daughter, Amy (Goodwin) Crossan and husband William; Grand Son, Aubrey Preston Goodwin and Jackie Runyan; John Dillon Goodwin and wife, Desarai; Grand Son, Clay Garrett Goodwin; Grand Daughter, Jannifer (Barnum) Byars and husband Slade; Granddaughter, Melissia (Barnum) Yeats and husband, Adam; Racheal (Barnum) Welker and Justin Richards; Sister, Jannie Lee (Mattix) Davis; Nephew, Aubrey Davis and wife Sue; Nephew, Mike Davis and wife Libby; Niece, Sherri (Davis) Moore and husband, Randy. In addition to the family above, he is also blessed to have 14 great-grandchildren and 6 great-great-grandchildren, many wonderful cousins, and friends Those who went HOME before him are, His Father, Aubrey Knox Mattix; Mother, Elsie Jewel (Whatley) Mattix; Brother-n-law, Tommy Davis; Niece, Beverly Davis A special thank you to all the medical staff that loved and cared for our beloved John during his illness.

John Wilborn Mattix, age 83, of Bangs, was escorted home by his personal Lord and Savior, Jesus Christ, on August 12, 2021. John was born October 1, 1937, in Decatur, Texas and at age 19 became a "knight in shining armor" to his newly wedded... View Obituary & Service Information

The family of John Mattix created this Life Tributes page to make it easy to share your memories.

John Wilborn Mattix, age 83, of Bangs, was escorted home by his...

Send flowers to the Mattix family.