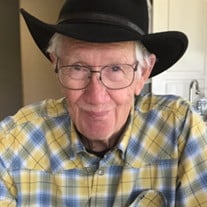 Johnny Ray Boler was born in Sweetwater, Texas on May 7, 1941 to John S. Boler and Cupa Richardson Boler. He left this earth from the comfort of his home on January 26, 2022 surrounded by his loving family. Growing up in Brownwood, Texas in the 40's and 50's Ray spent an almost idyllic childhood filled with freedom and adventure. According to his older brother, Jerry Bob, a typical summer day would find the guys hopping on their bicycles immediately after breakfast and not returning home until their mom whistled for them at lunchtime and again to come inside for supper. They would head to the creek to try their luck at fishing or to pester the birds with their BB guns. There were also some stories about jumping into the Bayou via a rope swing. Safely, of course! Baseball games (using a tennis ball) were conducted in the middle of the street while blocking traffic. Saturdays would find them each armed with a quarter hitting the downtown theaters to watch the Saturday serials for the admission price of nine cents. Ray attended South Ward and Coggin schools and Brownwood Junior High. He was a proud graduate of the Brownwood High School, Class of 1959, along with many classmates from the early elementary school years remaining friends even until today. Johnny Ray played football for the Brownwood Lions as a running back and defensive linebacker. What he lacked in size, he made up for in effort and love of the game. Ray was a football captain his senior year and served as president of the Senior Class. Following graduation, Ray attended college at Tarleton State College in Stephenville. On August 31, 1961 Johnny Ray married Alice Kay Bishop, his high school sweetheart, and they became parents to Stan (the man!) in 1963 and Stacye Raye in 1965. Ray began a 35-year career in the food merchandising business in the Dallas/Ft. Worth market as a retail salesman for Acord-Bohlander Company. Rising through the ranks Ray became Vice President of Retail Sales and a managing partner of the company. After retiring for a couple of years, Ray joined Atkinson-Crawford Sales, a candy broker, in retail sales. Wonderful friendships were forged during those years. Grateful to Jane and Duane Ellason, Van (deceased) and Janie King, Fran and Robert Torrence for the many years spent working and playing together. Ah, the memories!! An avid sports fan, Ray enjoyed watching the Texas Rangers, the Dallas Cowboys, the Dallas Mavericks, the University of Texas Longhorns, and, of course, his favorite, the Brownwood Lions! However, the games he enjoyed the most by far were those played by Stan and Stacye. Starting in Tyler, Ray coached Stan in flag football and the Bell Colts baseball team. After moving to Mesquite Ray became involved with the Falcon Football program for several years. Although not familiar with soccer, Ray quickly developed a love for the game and helped Coach Johnny Armstrong lead their daughters' team, the "Dirt Squirts", to win the Mesquite City Championship in their age group. Ray never missed a game when his kids were playing... from elementary school through high school. He was their biggest fan! He was their best friend! Ray inherited a love for fishing from his parents. Family vacations were often spent close to one of his favorite fishing spots on the Colorado River, Lake Brownwood, the Texas Gulf Coast, or Lake Fork. Ray never really enjoyed hunting. He much preferred to enjoy the beauty of God's creatures and creations. In recent years Ray could often be seen raising a coffee cup while toasting the buzzards on his morning walk around the creek!! Ray was not a complicated person. He lived his life based on the simple concepts handed down by his parents and grandparents. Honesty, integrity, respect for others, love of God and family were always foremost in Ray's life. His faith led him to believe strongly in the substance of things hoped for and to trust the evidence of things not seen. Ray was preceded by his parents, John and Cupa Boler, his in-laws, Clyde and Willie Bishop, son-in-law, Aaron Wall, sister-in-law, Leona Boler, brothers-in-law, Glen Hergenrader and Tom David Elder. Left to cherish his memory are brother, Jerry, wife, Alice Kay, son, Stan and Tamy, daughter, Stacye Raye, granddaughters, Brittani Springs and Alyssa Wall, great granddaughter, Zoe Raye Springs-Ratcliff, sisters-in-law, Elaine & Jim Roller, Sue Hergenrader, and Beverly Elder as well as a host of beloved cousins, nieces and nephews and friends. Very special thanks to Interim Healthcare Hospice and the wonderful staff, Alicia, Olivia and Dora for the care and kindness they so lovingly bestowed on Johnny Ray during the past year. He was ours for a time. He was our bridge over troubled waters. He was our calm in the storm. We are thankful for the love and life he shared with us. We loved him dearly. We will miss him!!

Johnny Ray Boler was born in Sweetwater, Texas on May 7, 1941 to John S. Boler and Cupa Richardson Boler. He left this earth from the comfort of his home on January 26, 2022 surrounded by his loving family. Growing up in Brownwood, Texas in... View Obituary & Service Information

The family of Johnny Ray Boler created this Life Tributes page to make it easy to share your memories.

Send flowers to the Boler family.