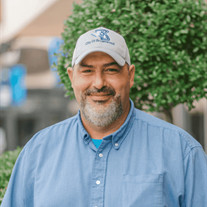 Jon Wade Ochoa, 44, passed away on June 18, 2021. A visitation with family will be held from 6:00 - 8:00 PM, Tuesday, June 22, 2021. The Funeral Service will be at 10:00 AM, Wednesday, June 23, 2021 at Heartland Funeral Home in Early, Texas with interment to follow at Greenleaf Cemetery. Jon was born September 17, 1976 in Tucson, Arizona. Jon died June 18, 2021 after a sudden illness at the age of 44. The years in between were filled with a zest for life, love, family, and more than a little mischief. Jon married Leslie Joyner on December 7, 2002 and began a life together that blessed them with two beautiful children. Jon was a gentle giant who was always there to support and lend a hand to friends and family alike. He was a hard worker and had spent the last 16 years working for the City of Brownwood in a variety of different roles, most recently being promoted to Parks and Recreation Superintendent. He was a dedicated father and most enjoyed watching his children in their various activities. He spent a lot of hours in the dugout of a baseball field or on the sidelines of a soccer game. He was a tinkerer and could fix most things at any given time. Jon was a quiet guy with a kind spirit but was always there to playfully joke and tease. He was also an animal lover who owned cats and had a special connection with his two dogs, Max and Turq. He is survived by his beloved wife of 19 years, Leslie along with their two children, Matthew (16) and Emily (13) who are his greatest legacy; his mother, Jessica, her husband Rod Earnhart of Arkansas and father Raymond Ochoa and his wife Sandy of Arizona. Other family members include his two sisters, Dee Ann Chisholm, husband Andrew, and Cindy Fuller, husband James, all of Brownwood, Texas. He will be missed as well by his in-laws, Tammy and Garry Myers, with whom he shared a deep bond; nephews, Cameron Chisholm, Michael Fuller, Jonathan Fuller and great-niece, Rosa Hoffman, as well as by numerous other family and friends. He was preceded in death by his stepdad, Jack Stultz and grandmother, Earlene Burge.

The family of Jon Wade Ochoa created this Life Tributes page to make it easy to share your memories.

Send flowers to the Ochoa family.