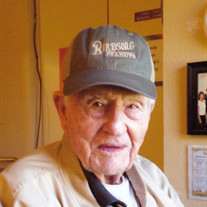 A graveside service for Joe Bob Browning, of Brownwood, will be held 2 P.M., Wednesday, May 13, 2020, at Greenleaf Cemetery in Brownwood, with Bill Slaymaker officiating. His services are entrusted to Heartland Funeral & Cremations of Early where he will lay in state until service time. Joseph Robert Browning (Joe Bob) was born March 17, 1922 in Ryan, Oklahoma to Ertie (Hickey) and John Browning and passed from this life Sunday, May 10, 2020, at the age of 98 years. Along with his parents, his sister Lottie and brother, W. C., he moved from Oklahoma to Gorman, Texas while a young baby. Joe Bob graduated from Gorman High School and married Lauris Ann Johnson, a young woman from De Leon that he met at a basketball game. He joined the United States Navy and served until discharged in 1946. Their son, Bobby, was born during this time. The family spent the next few years in Gorman farming peanuts and welcomed their new daughter, Kathy. They moved to the Texas Panhandle where he worked for Phillips Petroleum north of Gruver, TX. for several years before moving back to Gorman. He returned to farming and worked at Smith Brothers Chevrolet, Birdsong Peanut Co., Texhoma Peanut Co., and Gunter Peanut Co. for many years until retirement. Joe and Lauris moved to Brownwood in 1975 and she passed away in 1983. He later married Ruth Howard and they spent 31 years together before she passed away March, 2016. Joe Bob worked hard, enjoyed his family, had fun traveling, and going to reunions. Joe Bob is survived by his daughter Kathy and husband, Bob Rodgers of Brownwood; son, Don Howard of Early, and daughter-in-law, Mary Browning of Glenwood Springs, CO. Grandchildren are Brantley Browning, Jennifer Flentge and husband, Doug; Kevin Rodgers; Jason Rodgers and wife, Bridget; Corby Rodgers and wife, Brandy; Marci Fowlkes and husband, J., 17 great grandchildren and 7 great-great grandchildren. Also, brother-in-law, Jack Johnson and wife, Nancy, numerous extended family members, and special friends, Robby and Lisa Gunter of Binger, OK. He was preceded in death by his parents, by wives, Lauris Ann and Ruth; his son, Bob Browning; daughter, Sue McCurry; sister, Lottie Morris; brother, W. C. Browning, and granddaughter, Susan McCurry Ellliott.

A graveside service for Joe Bob Browning, of Brownwood, will be held 2 P.M., Wednesday, May 13, 2020, at Greenleaf Cemetery in Brownwood, with Bill Slaymaker officiating. His services are entrusted to Heartland Funeral & Cremations of Early... View Obituary & Service Information

The family of Joseph Robert Browning created this Life Tributes page to make it easy to share your memories.

A graveside service for Joe Bob Browning, of Brownwood, will...

Send flowers to the Browning family.