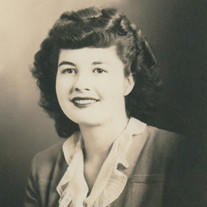 Wilma June Chastain Carmichael joined a chorus of angels on Tuesday, July 28, 2020. June was born in Brown County on Saturday, June 11, 1927, to Bonnie and Harvey Chastain. She grew up in Grosvenor and was active in the community for many years. June was Valedictorian of her graduating class at Grosvenor High School, and was All-District on her basketball team. While a teenager, she was introduced to Claude Carmichael by her uncle, J.D. Chastain. Claude and June were married on November 5, 1945 and were happily married for 67 years prior to Claude’s passing on February 7, 2012.June was a devout Christian, and in the past few years read the entire Bible three times. She was an active member of First Baptist Church in Grosvenor growing up, and later at Calvary Baptist Church in Brownwood. Very few times were the church doors opened that she wasn’t firmly seated on the back row. The love of June’s life was her family, and she is survived by her sons, Claude E. Carmichael Jr. and wife Jennie and Jimmy Carmichael. She is further survived by grandchildren, Erin Hudson, Betsy Carmichael, Stacie Earnest and husband Keith and Andrew Carmichael and wife Allison; nine great grandchildren, all of whom adored their Granna. She is also survived by her sister, Betty Flynn, and her brother, Grady Chastain and wife Pat; brother-in-law, Morris Wayne Davis, and several nieces and nephews. She was preceded in death by her parents, husband Claude; sister Allene Davis and brother-in-law Doug Flynn. People who were blessed to know and be a friend of June’s will certainly miss her. She was a unique lady and brightened the world wherever she walked. Often described, affectionately, as one of the toughest ladies ever known, she was a bright star that will be greatly missed. The family would like to offer their special thanks to the staff at Oak Ridge Manor Nursing Home and Solaris Hospice for their wonderful care of Mom. A special thank you to Earlene Teague for her care and friendship towards Mom for many years. And a heartfelt thank you to her doctors, Dr. Tom Byrd, Dr. Tammy McCullough and Dr. David Morales.

Wilma June Chastain Carmichael joined a chorus of angels on Tuesday, July 28, 2020. June was born in Brown County on Saturday, June 11, 1927, to Bonnie and Harvey Chastain. She grew up in Grosvenor and was active in the community for many... View Obituary & Service Information

The family of June Chastain Carmichael created this Life Tributes page to make it easy to share your memories.

Send flowers to the Carmichael family.