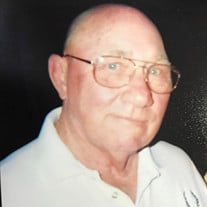 Kenneth Russell Bangert (Rusty), 89, passed away on October 7, 2021. Services will be Thursday, October 14, 2021, 2:00 p.m. at Heartland Funeral Home with visitation at 12:00 p.m. Interment will follow with military honors at Rocky Creek Cemetery in Brown County. Services are under the direction of Heartland Funeral Home. Rusty was born September 25, 1932 to Fred and Minnie Bangert in Sidney, Nebraska. Later, his Dad moved the family to El Paso for work. Rusty joined the military the first time at 17. His last tour of duty was in the Mediterranean, after serving his country in the United States Marine Corps for 23 years, retiring as a 1st Sergeant. While living in Odessa, he worked for E.L. Farmer Trucking, Thrasher Trucking and Warfield Truck Stop. Retiring again, with his wife, Frances, they joined many retired friends at Brownwood Lake, where they relaxed with family and friends. Many of his grandchildren will remember the days and weeks spent with him during the summer. He enjoyed dancing and holding great grandbabies. One of his many hobbies was building with wood and either selling his wares at the mall Peddler Store or giving to others. We will cherish those items made with love. Rusty was an avid golfer and member of The Hideout Golf Club. We don't know what he loved most, playing golf or the camaraderie and bantering with his friends while playing. He often spent time playing or watching golf with his children and grandchildren. He played a mad game of cribbage. His children often accused him of cheating, but we know he was just that good. Even though Rusty was a man of few words, he never failed to tell each and every one that he loved them. He was preceded in death by Patricia and Frances; his parents, Fred and Minnie Bangert; brother, Harold Bangert; sister, Nadine Van Fossen; and daughter, Landa Loranc-Autrey (husband, Mike). He is survived by his 8 children, 20 grandchildren, 20 great grandchildren, his brother's daughter, Gwen Gooch and her daughter, Vickie Lynn Waterman and family, as well as, many nieces and nephews. He married Patricia Sue Latham in 1957. He is survived by his 3 children: Cindy Pierce with husband Richard, Cheryl Davis with husband Terry and Kenny Bangert with wife Theresa. His loving grandchildren are Amber Selby with husband Mason (Scout, Shot and Sadie), Lindsey Adams with husband Kris (Kamille and Kace), Lauren Terrell with husband Andrew (Ripken and Lorelai), Holli Barbee with husband Jayce (Hattie and Lynlee), Shelby Williams with husband Austin (Emmersyn and Hunter), Andrea Davis, Zachary Bangert with wife Madison, Logan Bangert with wife Tahnee (Brayden and Josie) and Brittany Bangert. He married Frances Pearl Harvey in 1987. He is survived by her 5 children: Rose Baumann, Berna Blazier, Cindy Toombs with husband Clay, Richard Baumann with wife Nola, and Scot Loranc with wife Robin. His loving grandchildren are Jamie Edwards (Nicolas and Jamison), Deric Cook, Lawrence Hernandez, Calvin Hernandez, Coby Baumann with wife Cassie (Grady and Julianne), Anthony Baumann with wife Courtney (Zoe, Erin and Brock), Blake Baumann, Austin Loranc, Royce Loranc, Keezia McDonald and Tye Lange. We love you, Dad, Pop, Papa Rusty, Grandpa Bangert! In lieu of flowers, donations can be made to Wounded Warriors, St. Jude's, and Hendrick's Hospice. Semper fi

The family of Kenneth Russell Bangert created this Life Tributes page to make it easy to share your memories.

Send flowers to the Bangert family.