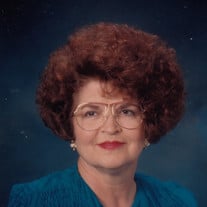 Ladon (nee Graham) Spence, 88, passed away on Friday, January 28 in Brownwood. A native of Amarillo, she attended the University of Texas Medical Branch in Galveston, where she met her future husband, Dr. Allan J. Spence of Brownwood. Together, they raised two sons, David and Dan, who survive her. On a train ride home for Spring Break in 1955, she met her future husband. After both returned to their studies in Galveston, he eventually called her and within a week of their first date told her that he loved her. He had promised his parents, however, that he would not marry until he finished his medical studies. So, a two-year courtship ensued and, true to his word (to both his parents and his fiancée), he married her the same day as he graduated. That her married life began with a chance meeting on a train might explain her efforts at the Brownwood Depot. An art collector and former owner of Daisy Antiques & Gifts, she decorated the Harvey Girl's Room above the Chamber of Commerce during the restoration of the Depot. The room served as a dormitory for the girls who waited tables in the Harvey House Hotel, adjacent to the train station. She even arranged for a historical marker to be dedicated on the site, preserving some of Brown County's history. That dedication to Brownwood was expressed over a lifetime of service. She served as secretary of the Brownwood Civic Improvement Foundation, was a member of the Woman's Club, Rotary Anns, Medical Alliance, Preservation Partnership and the Community Arts Coordinators, responsible for placing a bronze statue of a little girl reading in front of the Brown County Library. During the 1980's, she supported the War on Drugs, raising money and distributing anti-drug information throughout Brown County schools. For her efforts, she was invited to a luncheon with First Lady Nancy Reagan in Dallas. Beyond her family, church and social obligations, Ladon enjoyed cooking, playing bridge, traveling, music and visiting with friends. Ladon is survived by her sons, David and his wife Sharon of Corpus Christi and Dan of Dallas; and numerous friends and loved ones. Ladon was preceded in death by her husband, Dr. Allen J Spence and her parents, Iven and Radie Graham.

Ladon (nee Graham) Spence, 88, passed away on Friday, January 28 in Brownwood. A native of Amarillo, she attended the University of Texas Medical Branch in Galveston, where she met her future husband, Dr. Allan J. Spence of Brownwood. Together,... View Obituary & Service Information

The family of Ladon K. Spence created this Life Tributes page to make it easy to share your memories.

Send flowers to the Spence family.