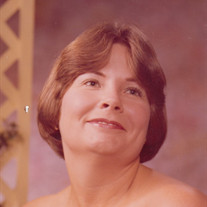 Linda Kay Whitney, age 74, of Brownwood, passed away Thursday, March 11, 2021. A memorial graveside service for Linda will be held on Friday, March 19 at 3:00 P.M. in the Italy Cemetery in Italy, Tx. Linda was born to Floyd and Mary Iola (Guthrie) Murehead on October 18, 1946 in Italy Tx. At the early age of 2, Linda was diagnosed with polio, she was treated at Scottish Rite Hospital. In the beginning, she could only see mom and dad through a window. She spent 16 years going to and from Scottish Rite. While in and out of the hospital she attended Italy High School where she graduated. She was told earlier by the doctors at Scottish Rite she would never walk, but they were wrong. Through numerous bone fusions and rehab, she could walk with a brace on her left leg. The hospital doctors and staff were impressed by this so they hired her after graduation. While there, she became a lab tech, and then an x ray tech. Later on, she decided to change medical fields and received her license as a respiratory tech. For many years she took care of the sick in the local hospital in Waxahachie, working in the ER, ICU, and other hospital wings. Linda was always a kind hearted person. She loved her work helping others. While working, she had a God given talent to bake and decorate cakes. She made some of the most beautiful cakes. Some even had a humorous side to them. People would give her a picture or cartoon and she could decorate free handedly and they would look exactly like the picture. Later in life she developed post-polio syndrome. She became weaker as the years passed. She never gave up no matter how she felt. She loved going to Rockport to go fishing. She once caught fish almost as long as she was tall. Of course, she was only 4'11". As time passed, she developed neuropathy and suffered greatly from it. Then she was diagnosed with Parkinson's disease. Linda was under the care of Senior Care Nursing Home. She was loved by the staff and given great care while there. Fate repeated itself when the Covid Virus struck, once again she could only visit through a window. Fortunately, she could receive visitors with strict precautions. She would have a good day or only a few good moments as her health declined. During a good moment she told a staff member, "The man upstairs told me he was taking me home in four days." On Thursday night of the fourth day, she went home to be with the Lord. Linda is survived by her husband, Howard Whitney; step-children, Casey Whitney and Carrie Whitney; grandchildren, Justin Whitney, Rhianna Whitney, Sylven Whitney & Rowan Whitney; great grandchildren, Benjamin Howard Whitney & Zaidan Creed Daughetry; sisters, Carolyn Brannon and Betty Huddle; niece, Ladonna Lewis; nephews, Randy Murehead and wife Angela, and Michael Elliot and wife Renea. She is preceded in death by her parents; son, Scott Robbins; brothers, Floyd Ray Murehead and Billy Wayne Murehead, and sister, Joyce Faye Murehead.

Linda Kay Whitney, age 74, of Brownwood, passed away Thursday, March 11, 2021. A memorial graveside service for Linda will be held on Friday, March 19 at 3:00 P.M. in the Italy Cemetery in Italy, Tx. Linda was born to Floyd and Mary Iola (Guthrie)... View Obituary & Service Information

The family of Linda Kay Whitney created this Life Tributes page to make it easy to share your memories.

Send flowers to the Whitney family.