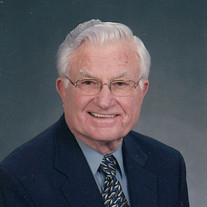 Lowell Dean Skaggs was the patriarch of our family -- The leader who guided us by providing a godly example, sharing scripture and incorporating biblical insight into our daily routines, and showing unconditional love in a way that only a believer can. He was born in Iraan, Texas on March 10, 1930, to Ardell Joiner Skaggs and Robert Stanley Skaggs- both of Gorman, Texas. He was born in the heart of the Great Depression, in a tent, inside a camp for workers at the Ohio Oil Company. He often compared himself to Abraham of the Old Testament who was also born and lived in a tent. In 1933, his dad passed away with pneumonia. His mother then moved the children to Duster to be close to her family where he attended school and graduated. He made his way to west Texas oil field where he worked for El Paso Natural Gas Company. At the age of 21, Lowell Dean married Mary Ethylene McCasland, the love of his life. He was drafted into the United States Army and spent 20 months in Japan during the Korean Conflict. Writing letters which took weeks to be delivered was the couple's only communication. He returned home from the Army to his old job at El Paso Natural Gas in Jal, New Mexico. They were blessed with four children during this time: Gary, Connie, Larry, and Kristi. Lowell Dean gave his life to the Lord shortly after returning home from his time spent overseas in the Army. It was around 1961 that he began feeling the call to the ministry. His two oldest children became sick, and he was isolated with them for 8 days in the hospital. Spending this time with them provided the experience that finalized his calling to become a minister. He graduated with a Bachelor's degree in 1966 from the College of the Southwest in Hobbs, NM with honors, all while working 40 hours/week and driving back and forth from Jal to Hobbs. After that, he was able to quit his job and move to Fort Worth to attend Southwestern Baptist Theological Seminary graduating in 1969. He was pastor in Huckabay from 1967-1968, then moved to Mexia where he pastored from 1969-1972. He led the First Baptist Church in Early from 1972 to 1985, then to Clyde from 1985-1992. Following his "official" retirement, he and Ethylene moved back to Early to be close to family. He continued to be a leader in the church, driving to Gustine and Star to pastor small churches there. Up until the last few months, he was an active member at Early First Baptist Church and continued to provide insightful leadership to his family and community. His most amazing accomplishment was his commitment to his Savior. Lowell Dean dedicated over 50 years to leading churches across Texas. Through his ministry, he was blessed to be able to lead many people to the Lord through baptism and officiated many weddings, including many of his family members. He was known for his ability to memorize and quote scripture and narrate it in a manner that one could relate to present day trials and tribulations. His legacy lives on in the family he leaves behind and the people whose lives he has touched. He is survived by his wife, Ethylene Skaggs; sister Margie Hale; four children and their spouses; Gary and Renea Skaggs, James and Connie Moss, Larry and Delinda Skaggs, and Tommy and Kristi Davis; eight grandchildren and their spouses; Kevin Skaggs, Heather Gilbert, Eric Skaggs, Melanie Larose, Angela Williams, Sammy Skaggs, Staci Brodbeck, and Trey Davis; and twelve great-grandchildren. Lowell was preceded in death by his parents, brothers Stanley Skaggs and Melvin Skaggs, sister-in-law Marinell Skaggs, and grandson Bryan Dean Skaggs. Memorials may be given to Early First Baptist Church or Good Samaritan.

Lowell Dean Skaggs was the patriarch of our family -- The leader who guided us by providing a godly example, sharing scripture and incorporating biblical insight into our daily routines, and showing unconditional love in a way that only a believer... View Obituary & Service Information

The family of Lowell Skaggs created this Life Tributes page to make it easy to share your memories.

Lowell Dean Skaggs was the patriarch of our family -- The leader...

Send flowers to the Skaggs family.