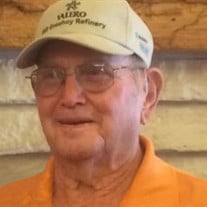 Mac Kiser was born on June 17, 1926, in Brady, Texas, the second oldest of eleven children born to George Ross and Myrtle Lillian Adams Kiser. In 1943, at the age of 17, Mac joined the U. S. Navy to serve his country during World War II. On June 11, 1948, Mac married Joyce Bernice Duffy in Andrews, Texas. After Bernice's passing April 21, 1997, Mac married Judy Ann Simpson, who later passed on February 18, 2013. Mac worked in the oilfield over 48 years in and around Crane and Odessa before retiring. He resided for the last 12 years in the Owens community in Brown County. Mac is survived by his children, Charles and Nancy Curtis of Henderson, Loretta Bronstein of May, and Jackie and Maria Kiser of Corpus Christi. Three stepsons Tony Mathews of Austin, Bryan and Loretta Thompson of Early, and Joey Horton of Waxahachie, fifteen grandchildren, and 32 great grandchildren. And eight brothers and sisters, Lola Pounders of Gallatin, TN, Eula Tomlinson of Hamlin, J.D. Kiser of Jasper, Stella Leamons of Pflugerville, Lloyd Kiser, Dorothy Baker, Melvin Kiser and Nell Jones all of Odessa, and numerous nieces, nephews, and cousins. Preceding Mac in death are both his parents, George and Myrtle Kiser, two brothers and sisters-in-law, Marvin and Nelta Kiser, B J and Connie Kiser, two wives Bernice and Judy, a granddaughter Tammy Suzanne Noland, and a son-in-law Ely Bronstein. Visitation will be Wednesday, June 10th 6 pm to 8 pm at the Heartland Funeral Home in Early, Services will be Thursday, June 11, 2020, at 10 am at the Heartland Chapel. Burial with military honors will follow at 2 pm at Fairmont Cemetery in San Angelo, Texas. Pallbearers will be Scott Wagner of Waco, Jeff Robertson of May, Don Cloyd of Katy, Sean Cofer of Corsicana, Jerry Kiser of Jasper, and Terry Takeda of Katy. Please dress casually. In lieu of flowers, please donate to any organization that supports our Veterans or Troops. Such as: Disabled American Veterans, Wounded Warrior Project, or Gary Sinise Foundation.

Mac Kiser was born on June 17, 1926, in Brady, Texas, the second oldest of eleven children born to George Ross and Myrtle Lillian Adams Kiser. In 1943, at the age of 17, Mac joined the U. S. Navy to serve his country during World War II. On... View Obituary & Service Information

The family of Mac Dee Kiser created this Life Tributes page to make it easy to share your memories.

Send flowers to the Kiser family.