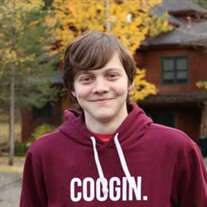 Mason Williams went home to be with his Lord and Savior, Jesus Christ, on February 15th, 2021, after a courageous battle with cancer. Mason Cole Williams was born on March 11th, 2003 in San Angelo, Tx to Randy and Melissa Williams. They moved to Brownwood in July of 2006. They joined Coggin Ave. Baptist Church soon after. Mason accepted Jesus as his Lord and Savior, and was baptized on February 6th 2007 by Tim Skaggs. That day was one of Mason's favorite days of his life. Mason loved his family deeply, and had a special bond in unique ways with both of his parents. He had many late-night discussions with his mom, and loved to watch movies, especially Marvel, with his dad. He loved all things movies. He always made sure his parents knew how much he loved and appreciated them. He was very kind and compassionate, always caring about others. He was hilarious, and always had his friends and family laughing. He was unapologetically Mason. From an early age, Mason had a deep desire to honor the Lord with his actions and life. He learned to lean on the Lord at a young age after he developed back-to-back chronic illnesses. Hospital visits and surgeries were a big part of his life throughout his short life. Though he was sick often, you would never know it because he never complained, and wanted to live a normal life. He never lost his faith, and clung tightly to the Lord through each hardship. When he was diagnosed with cancer in June, he handled it with great strength, and once again trusted the Lord. His strong unwavering faith was evident in his fight with cancer. Even in the middle of the hardest part of his life, he pointed others to Christ. Mason cared deeply about living a life that glorified God, and it showed by the way he lived his life, especially through the darkest seasons. It was his greatest hope that through his pain and suffering, others would come to know the Lord. Mason was an active member of Coggin youth, where he developed strong friendships with a great group of friends who all shared a love for Christ, and enjoyed weekly bible studies and dinner at Wing Stop. His relationships with his friends, youth leaders, and youth minister were very meaningful throughout his battle with cancer. Mason cared deeply for this group. The way they cared for him, and carried him, impacted his life in a big way. They were a constant sense of support throughout his fight. Mason's life was short, but he had a great impact on so many lives. You knew Jesus just by knowing Mason. He has many family and friends that love him dearly. He has forever changed each of our lives, and will be missed greatly. Mason is survived by his parents, Randy and Melissa Williams and sister Kamryn Williams. Grandparents Robert and Gayla Sanders of Brownwood; and Joe and Pam Williams of Baird. A great grandfather, Charles Nance and wife Linda of Levelland. Aunt and Uncle, Amanda and Justin Warren of Robert Lee, Tim and Frances Williams of Bastrop, and Shatan Rushing of Austin. Cousins Hallie and Jayton Warren of San Angelo, Preston Warren of Robert Lee, and Shelley Tucker of Lubbock. He has a large extended family who love him deeply. He is preceded in death by his uncle Terrell Williams, cousin Zack Williams; Great Grandparents James and DeAlva Windham, Robert and Claudia Williams, Ray and Irabelle Sanders, and Dorothy Nance. Pallbearers are Spencer Scull, Blake Brasher, Jax Managan, Brad Robinson, Michael Felts, Santos Munoz, Asher Choate and Paul Chandler. Mason was very adamant about everyone dressing very casually. Shorts and a tee shirt, sweat pants, or jeans and a tee shirt. We want to honor his wishes, so dress comfortably. In lieu of flowers, you can donate to the Mason Williams Memorial Scholarship Fund through Coggin Church. John 14:1-6 “Do not let your hearts be troubled. You believe in God, believe also in me. My Father’s house has many rooms; if that were not so, would I have told you that I am going there to prepare a place for you? And if I go and prepare a place for you, I will come back and take you to be with me that you also may be where I am. You know the way to the place where I am going. I am the way and the truth and the life. No one comes to the Father except through me.

Mason Williams went home to be with his Lord and Savior, Jesus Christ, on February 15th, 2021, after a courageous battle with cancer. Mason Cole Williams was born on March 11th, 2003 in San Angelo, Tx to Randy and Melissa Williams. They moved... View Obituary & Service Information

The family of Mason Williams created this Life Tributes page to make it easy to share your memories.

Mason Williams went home to be with his Lord and Savior, Jesus...

Send flowers to the Williams family.