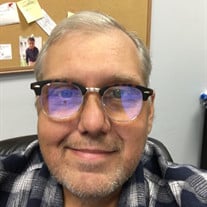 Michael Wayne Beavers Michael Wayne Beavers, age 53, passed away on Sunday, January 17, 2021. Private family services at a later date. Mike was born on Friday, October 6, 1967 in Stroud, OK to Jerry Wayne Beavers and Barbara Shields. He graduated from Stroud High School, Class of '85. Mike served proudly in the U.S. Army from November 1985 through October 1995, earning the rank of Sgt E-5. He is survived by his wife, Karlene Reed Beavers and stepson Dillon Reed of Brownwood, TX; his brother, Robert Rozell of Stroud, OK; sisters, Jeri Beavers of Moore, OK, Brooke Hermann of Orlando, OK, and Amber Williams of New Milford, CT; as well as numerous nieces and nephews. He was a loved and valued member of the Guess Family in Louisville, KY and the Ryder Logistics Family in Brownwood, TX. In lieu of flowers, Mike would love if you made a donation to your favorite Military Support Charity in his name.

The family of Michael Beavers created this Life Tributes page to make it easy to share your memories.

Send flowers to the Beavers family.