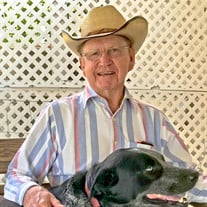 Neil Debbs Carroll, age 83, was born October 25, 1938 in Alice, Texas to Lester Edward Carroll and AnnaLee Whitley Carroll. Neil graduated from Abilene Christian University in 1961, majoring in chemistry and physics and playing on the tennis team. There he met Martha Nell McClung, daughter of Paul and Lucille Wilmeth McClung, while playing tennis. They married August 25, 1961, and celebrated their 60th wedding anniversary last August. Their children are Celeste Anne Carroll, Kevin Paul Carroll and wife Kathy Stayton with their two children - Kason Neil and wife Emily, and Kastin, Kent Neil Carroll and wife Karey Lander with their three children - Cooper, Cash, and Kinley; and Kerry Mark Carroll and wife Michele Williams with their two daughters - Taylor and Rylee. (All above children are also graduates of Abilene Christian U.) Neil has two brothers, Larry (deceased) and Jerry (wife Norma Shrum) of Granbury TX. He has two brothers-in-law, Paul Wilmeth McClung (deceased) and Larry (wife Gail Legg) of Dallas. For the first seven years of their marriage Neil taught chemistry and physics and coached tennis back in the High School he had attended in Alice Texas. During that time he had National Science Foundation grants at Montana State U in Bozeman MT (chemistry) and at Western Washington U in Bellingham WA (physics) where he and Martha spent summers. Then he moved to Austin TX where he worked for Phoenix Lamar. Wanting to raise his children in the country, he bought a ranch at Liberty Hill, where they eventually moved in 1973 and lived until 2006. During that time Neil established Cable Products Inc in Liberty Hill. About the time of 9/11 much of the electronic cable assembly work was going to China and Neil closed his company. He returned to his first love of teaching, and taught physics, algebra, and Senior Boy's Bible at Brentwood Christian School. He was a popular teacher but did not enjoy the drive, having to leave home early and arrive home late to avoid Austin rush hour. After Neil's mother broke her arm and needed round the clock care, and Martha's parents entered assisted living at CARE in Brownwood, it was decided that it was necessary to move Neil's Mom to the same facility and find a place nearby to live. The Carrolls moved to their beautiful ranch between Comanche and Gustine in the fall of 2006. It was an ideal place for camping, hunting, horseback riding, and outdoor adventure with Neil's much loved 7 grandchildren and many happy hours were spent there. The Carroll family are members of the Church of Christ and Neil preached, led singing, and taught Bible classes wherever he lived. Neil studied the Bible often and lived his life accordingly. He was an admired role model for his family. Neil fought a long, hard battle with brain cancer beginning Jan 26, 2021, finally succumbing to it on Feb. 18, 2022. Much of 2021 was spent in the devoted care of son Kevin and wife Kathy of Ft Worth as his two brain surgeries were performed in Harris-Methodist Hospital there and rehab was done there. But he was finally allowed to return to his beloved ranch (and dog Zeus) in Comanche County in September 2021. Good neighbors along their road have been a blessing and invaluable help, especially Jason Luckie across the road who came daily to care for animals and check on Martha. The Carrolls give special thanks to the CCS Hospice team for their loving, kind and diligent care of Neil during his last days. In lieu of flowers, the family requests memorial donations be made to World Bible School, 16110 Anderson Mill Rd., Cedar Park, TX 76813

The family of Neil Debbs Carroll created this Life Tributes page to make it easy to share your memories.

Send flowers to the Carroll family.