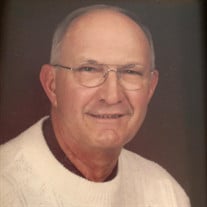 Funeral services for Norman Holl, age 77, of Brownwood, will be held at 2:00 PM, Wednesday, July 22, 2020 in the Heartland Funeral Home Chapel. Burial will follow in the Bangs Cemetery. The family will receive friends on Tuesday evening from 6:00 until 8:00 at the funeral home. Norman passed from this life on Friday, July 17, 2020, in an Abilene hospital. Norman Lee Holl was born on February 14, 1943 in Estherville, Iowa to Harris Lee and Evelyn Alice (Iverson) Holl. He graduated high school in Dolliver, Iowa in 1960 and attended Mankato State University before joining the US Air Force, where he served from 1961-1965. He was named Airman of the month in August 1964 at the 1507th Support Squadron in Guam. He also attended Hardin-Simmons University in Abilene. Norman married Sharron Brewer on February 17, 1964 at Faith Baptist Church. Norman worked for Artsway as a welder in Armstrong, Iowa and worked in Andrew in consumer finance as a loan officer, a welder for Carruth’s Welding in Houston, and as an Industrial X-Ray technician for Scope Inspection Co. Norman loved his church, Haven of Hope. He also enjoyed boating, fishing, part-time welding, gardening, Bible study, sharing Jesus with everyone, bike rides and taking the grandchildren for ice cream. He was passionate about his wife, his children, grandchildren and great-grandchildren. Norman is survived by his wife of 56½ years, Sharron Holl of Brownwood, two daughters, Tammy Johnson and husband Denny of Eagle Grove, Iowa, Patricia Airheart and husband Jackie of Brady, Texas; six grandchildren, Shanea Bubeck, Tyler Johnson, Kory Green, Kevin Green, Alyssa Allbee and Emilee Johnson and eight great-grandchildren; three sisters, Wanda Showalter and husband Guy, Marlys Saeger and husband Will and Phyllis Haukoos and husband Dean. He was preceded in death by his parents, an infant sibling and his in-laws, Modene and Wilburn Brewer. If you would like to send a donation to the family for medical and funeral expenses, please mail them to Sharron Holl, 1017 Santa Clara, Brownwood, TX 76801.

Funeral services for Norman Holl, age 77, of Brownwood, will be held at 2:00 PM, Wednesday, July 22, 2020 in the Heartland Funeral Home Chapel. Burial will follow in the Bangs Cemetery. The family will receive friends on Tuesday evening from... View Obituary & Service Information

The family of Norman Lee Holl created this Life Tributes page to make it easy to share your memories.

Funeral services for Norman Holl, age 77, of Brownwood, will...

Send flowers to the Holl family.