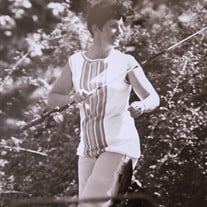 Patricia Ruth Chastain came into this world on February 11, 1937. She was affectionately called Dannie by her family. Pat was a lifelong resident of Brown County, Texas. She attended Brownwood High School and graduated from Howard Payne University. Pat married her high school sweetheart, Grady Milton Chastain on August 4, 1957. After graduating from college, Pat started and ran Chastain Kiddie College, affectionately called Pat's kindergarten and taught for Brownwood ISD for many years. Pat spent her life dedicated to service to others. Her first dedication was to God and her family. Her greatest joys were raising her family and watching her children, grandchildren, and great grandchildren grow. Pat was a devoted and loving wife and embraced her calling as a Pastor's wife and would stop cold and pray for someone in need at the drop of a hat. Some of her favorite things to do were fishing in Brownwood Lake, teaching reading and cooking. Pat was an amazing cook and loved to feed her family, no matter how many times she was told that we were not hungry. Her skill and love of cooking were passed down to her family. Pat also loved Texas and bluebonnets. Patricia Ruth Chastain leaves behind a legacy of family. She is survived by two sons, Grady Douglas Chastain and his wife, Jamie Chastain; David Kirk Chastain, and wife, Genetha Chastain; and one daughter, Laurie Fay Chastain and her fiancé, Shane Morrison. Pat is also survived by her grandchildren, Hollie Chastain; Candice Beal; Cade Chastain; Jenna Chastain; Zachary Lindsay; Alyssa Alamia; Katherine Chastain; Luke Chastain; Jake Kittrell; and Jacob Chastain; numerous great-grandchildren; great great grandchildren; nieces and nephews. Pat is also survived by one half-sister, Marianne Pelletier. Pat was preceded in death by her mother, Fay Brooks; her husband, Grady Chastain; and two great grandchildren, Grady Robert Beal and Jackson Mac Beal. Patricia Ruth "Pat" Chastain, age 84, of Brownwood, left this world behind and went to be with her Lord and Savior and her loving Husband, Grady, on Saturday, January 22, 2022.

Patricia Ruth Chastain came into this world on February 11, 1937. She was affectionately called Dannie by her family. Pat was a lifelong resident of Brown County, Texas. She attended Brownwood High School and graduated from Howard Payne University.... View Obituary & Service Information

The family of Pat Chastain created this Life Tributes page to make it easy to share your memories.

Send flowers to the Chastain family.