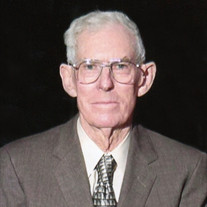 Paul Joseph Muhle, passed away on Friday, February 18, 2022 in Hobbs, NM with his family by his side at the age of 91. Paul's family will host a visitation on Wednesday, February 23rd from 6 to 8pm at Heartland Funeral Home in Early. Funeral Service will be at 11 am Thursday the 24th in the Heartland Funeral Home Chapel with a private interment to follow at Wolf Valley Cemetery in May, TX. Paul was born December 11, 1930 in Anson, TX to Paul and Catherine Muhle. He graduated from May High School in 1948 and went on to attend Howard Payne University graduating in 1954 with a degree in Chemistry. After graduating from college, Paul taught high school math for one year. He then enlisted in the Army where he served for 2 years at Ft. Bliss. Paul married Iola Camille Robertson Wilson on August 4, 1965 and began a life together that blessed them with 2 children, Chrissy and Paul Jr. Paul worked as a chemist for Kerr McGee for 19 years before retiring. After retirement Paul move back to his home town of May, TX. He farmed and ranched until his death. Paul wanted to be remembered as a person who cared for his community. He loved the land and his animals. He could sit and talk for hours about history, and farming the land, if you would sit down and listen. He told great stories. Paul was a member of the Brown County Agricultural Board, and Wolf Valley Cemetery Board. Paul lived to see 16 presidents. He loved history and the history of Rising Star and May, TX. He donated a U.S. Model A to the U.S. Wind Engine and Pump Co., and a Windmill to the American Windmill Museum in Lubbock, TX. Paul is survived by his daughter, Chrissy Roberts and husband Joel of Tyler, TX; son Paul Wilson and wife Vicky of Hobbs, NM; 2 grandsons, Andy Davis and wife Kayci of Lindale, TX, Shelby Wilson and wife Jessie of Lubbock, TX; 3 granddaughters, Dusti Kennington and husband Willo of Chandler, TX, Cally Crow and husband Kyle of Troup, TX, Alex Wilson and friend Jayden Galyean of Hobbs, NM; brother Glen Roy Muhle of May, TX; sister Donella Settle of Plainview, TX; 10 great grandchildren; his caregiver Trisha Lambert of Tatum, NM. He is preceded in death by his wife Iola Robertson Muhle; parents Paul A and Catherine Muhle; sisters, Caroline Goins and Betty Schenault; and a brother Lester Muhle.

Paul Joseph Muhle, passed away on Friday, February 18, 2022 in Hobbs, NM with his family by his side at the age of 91. Paul's family will host a visitation on Wednesday, February 23rd from 6 to 8pm at Heartland Funeral Home in Early. Funeral... View Obituary & Service Information

The family of Paul Joseph Muhle created this Life Tributes page to make it easy to share your memories.

Send flowers to the Muhle family.