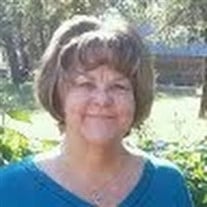 Paula Muske, 74, passed away on July 20, 2021, with her husband, Boyd, by her side in May, Texas. At her request, no service will be held. Paula was born November 1, 1946, in Newport, Arkansas. She graduated from Beecher High School in Mt. Morris, Michigan in 1964. She attended college at Michigan State University. She married Boyd Muske on December 17, 1983, in Brenham, Texas. She worked professionally as a recruiter for a law firm in Houston, Texas before retiring and moving from Brenham to May, Texas in 2007. She was an active member of May First Baptist Church and enjoyed her time as the editor of the newsletter. She found great pleasure in volunteering and helping others. Paula was fond of her little animals, especially Blondie and Blue. Paula is survived by her husband, Boyd Muske of May, Texas; Sons: Jim Ford of Spring, Texas and Joey Ford of Midlothian, Texas. She was preceded in death by her mother, Ocal Boone, and father, Paul Boone. Paula started a memorial of gifting to the Southern Christian Children's Home in Ft. Smith, Arkansas in honor of her father. Her father was an orphan. He and his brother and sister were placed in this Southern Christian Home on August 15, 1928, when he was only 6 years old. Their mother was deceased, and their father was no longer able to care for them as the country was deep into the great depression - there was no money to buy food to feed children. This Southern Christian Home has remained open throughout all these years, helping thousands of children, caring for them in a Christian lifestyle. Her father, Paul J. Boone, passed away in June of 2001. In Lieu of flowers the family requests that donations be made to the Southern Christian Home at SCHOME.ORG

Paula Muske, 74, passed away on July 20, 2021, with her husband, Boyd, by her side in May, Texas. At her request, no service will be held. Paula was born November 1, 1946, in Newport, Arkansas. She graduated from Beecher High School in Mt.... View Obituary & Service Information

The family of Paula Muske created this Life Tributes page to make it easy to share your memories.

Send flowers to the Muske family.