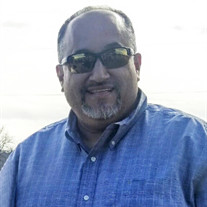 Ralph Vasquez, 54, of Early, Texas passed away Saturday, November 6, 2021. Visitation with family will be held Thursday, November 11, 2021 from 6:00 - 8:00 PM at Heartland Funeral Home. Funeral Service will be held at 2:00 pm, Friday, November 12, 2021 in the Heartland Funeral Home Chapel with interment to follow at Greenleaf Cemetery. Ralph Vasquez was born in San Saba, Texas to Raul and Margarita Zapata Vasquez. He graduated from San Saba High School and married the love of his life, Connie Espinosa, on March 4, 1995. They began a life together that blessed them with 2 sons. Ralph worked for Danhil Containers as a truck driver for the last several years but his passion was working on Chevrolet trucks, 60's & 70's models. Let him hang out in his garage with a cold refreshment, classic rock on the radio and something to tinker with on an old Chevy truck and he was a happy man. His passion could be seen all over his man cave or "dungeon" as he called it. He collected everything and anything that had to do with hot wheels and monster trucks and it was all on display for friends and family whether Connie liked it or not. Ralph loved spending time with his family and could often be found grilling some steaks or ribs with everybody over. He was a very straight forward man, you never had to wonder if he was shooting you straight, he would tell you like it was. He loved his family very much and was very close to his mother and spoke with her every day on the phone. Ralph is survived by his beloved wife, Connie Vasquez of Early, Texas; sons, David Zamora of Brownwood and Ralph Angel Vasquez & girlfriend, Stephanie Rodriguez of Coppell; grandsons, Dayton Zea Zamora and Deacon Zane Zamora of Brownwood; father, Raul Vasquez of California; mother, Margarita Vasquez of Brownwood; brothers, Lewis Vasquez and wife Bonnie of Brownwood and Kenny Vasquez of Early; sister, Erma Vasquez and husband Richard Windham of Brownwood; and many nieces, nephews, extended family, in-laws and friends. Ralph was preceded in death by his grandparents. Online condolences, memorials and tributes can be shared with the family at www.heartlandfuneralhome.net

The family of Ralph Vasquez created this Life Tributes page to make it easy to share your memories.

Send flowers to the Vasquez family.