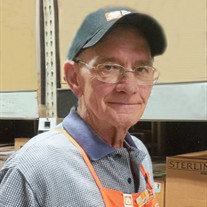 Wade Brincefield died June 13, 2020, at Brownwood Regional Center after several years of ill health. Wade was born to William Arthur and May Alene Wade Brincefield September 12, 1942. Wade was a 1961 graduate of Brownwood High School, an outstanding athletic who married his high school sweetheart, Sharron Jones Brincefield. They had one son, Shannon Wade. Wade and Sharron owned and operated the popular Tackle Shop on Belle Plain for over 30 years providing fishing and hunting supplies to customers as well as a gathering place to visit. Wade and Sharron were well known for their generous “dozen” minnows, for making their customers feel welcome, and helping customers when times were hard. The towering pecan trees at the Tackle Shop was a popular gathering place for rousing games of dominoes with the “Fun Bunch”. When Belle Plain was widened and the Tackle Shop sold the last minnows, Wade went to work for Home Depot where he was known as “Home Depot Wade”. Customers sought out Wade for his advice and some would even make sure Wade was working before going to shop. Due to declining health, Wade retired after over 20 years. Wade loved to hunt in Colorado and his annual hunting trips to Van Horn with family & friends as well as fishing on Lake Brownwood. Wade loved horse races and once owned several race horses. Wade and Sharron looked forward to their trips to Wendover, Nevada with their friends and reliving their exciting experiences. The last few years Wade attended every game he could to watch his great nieces and nephew Davalynn, Hadley and Bryson play sports. Wade was preceded in death by his wife, Sharron Jones Brincefield by nine days; their son Shannon Wade, and his parents. Wade was devoted to caring for Sharron despite his declining health. Family and care givers believe he willed himself to live to be with Sharron. Those left to cherish his memories and tell Wade “stories” are sister, Joye Bradford; brother, Marvin Brincefield and wife Linda; nephews: Tim & Susan Perkins, Shane and Jana Perkins, Mike and Belinda Brincefield; Niece’s: Shelly and Kevin Greene, Jennifer Perkins; brother-in-law Jimmy and Ann Jones; sister-in-law Vickie Jones and numerous nephews and nieces as well as a host of friends. The family thanks the staff at Cross Country Health Care for the loving care Wade and Sharron received. Memorials can be made to the Kidney Foundation or your favorite charity.

The family of Wade Brincefield created this Life Tributes page to make it easy to share your memories.

Send flowers to the Brincefield family.