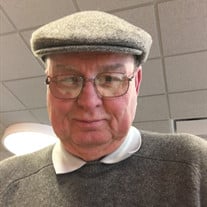 Richard Lynn Wall, 78, of Brownwood passed away Tuesday, June 2, 2020 at Brownwood Regional Medical Center. Richard was born to Leslie and Hazel Wall on April 24, 1942 in Brownwood. He loved sports, his favorite being track and field, and being on Lake Brownwood with family and friends. After graduating from Brownwood High School in 1960, he attended North Texas State and then served his country in the Army National Guard of Texas. After his military service, Richard joined his father in the family business – TWT Moulding Co. and later Wall Moulding & Associates, which is still proudly family owned and operated by the third generation. Richard and his brother Kirk made the family business an international corporation. His area of expertise was purchasing and picture frame moulding was his career until he retired in 2014. Richard loved fishing, both fresh and saltwater, and riding motorcycles. After they married in 2003, Richard and Bonnie enjoyed travelling all over the US and the world together. Richard loved to laugh and just live life. He was generous and took great comfort in his walk with the Lord. He was preceded in death by his parents, his first wife Donna (Dennis) Wall, infant son Michael Terry Wall, sister Lujean Quarles and grandson Wesley Yonnie. Richard is survived by his wife Bonnie (Pond) Wall of Brownwood, brother Kirk and Darlene Wall of Brownwood, daughters Lisa and Dave Mire of Mansfield, and Chris and Brian Waldorf of Brownwood, step daughter Kim and Terry Mitchell of Early, grandkids Sydney, Connor, Dylan, Madie, Keegan, Taylor, Logan, Mya, Kaitlynn and Riley and his great grandkids – including his special sidekick Koralea. Richard was a member of Calvary Baptist Church in Brownwood. In lieu of flowers, please consider a memorial to Calvary Baptist Church. The family would like to thank the wonderful nursing staff at Brownwood Regional Medical Center ICU and 4th Floor and Solaris Hospice for their compassionate care during difficult times, and Dr. Amy Tindol, Dr. Roy Byrd and Dr. David Morales for being not just great physicians but also amazing care givers – we are truly grateful to all of you.

Richard Lynn Wall, 78, of Brownwood passed away Tuesday, June 2, 2020 at Brownwood Regional Medical Center. Richard was born to Leslie and Hazel Wall on April 24, 1942 in Brownwood. He loved sports, his favorite being track and field, and being... View Obituary & Service Information

The family of Richard Lynn Wall created this Life Tributes page to make it easy to share your memories.

Send flowers to the Wall family.