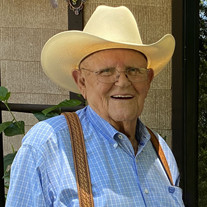 Robert Ray Agee, 91, of Bangs, Texas passed away Thursday, March 24, 2022. A visitation will be held from 6:00 - 8:00 PM, Tuesday, March 29, 2022 at Heartland Funeral Home. Graveside service will be held at 1:00 PM, Friday, April 1st, 2022 in the Nocona City Cemetery, 100 Cooke St, Nocona, TX 76255. Robert was born November 11, 1930 in Nocona, Texas to John Dane "J.D." and Minnie (Goldsmith) Agee. He graduated Prairie Valley High School where he loved to play Basketball and went to the State Tournament with the team. As a young man in North Texas, Robert loved to go hunting, mainly Coon, Quail and other birds, but he shared fond memories of this time in his life. He enjoyed watching basketball and baseball, rodeos and later in life he passed the time with country music shows and game shows. In the 1950's, Roert went to work for the Texas Company which later became known as Texaco. He worked 37 years for them and retired in the late 80's. Robert spent time with his son playing golf although he wasn't as avid a player as John is. He enjoyed his retirement sitting on the porch at the farm, telling stories and watching the numerous hummingbirds, checking on the cattle and growing a vegetable garden. Robert is survived by his son, John Agee and his wife, Mary of Bangs; granddaughter, Kimberly Beasley and husband Robert of Sapulpa, OK; grandson, Brad Agee and wife Kristina of Greenwood; sisters, Willie Bell Cable of Nocona and Peggy Warwick of Escondido, CA; and numerous great grandchildren and great-great grandchildren; many nephews, nieces and friends. Robert was preceded in death by his parents and a brother, Gene Agee. The family has requested in lieu of flowers that you make a donation in Robert's name to your favorite charity. Online condolences, tributes and memorials can be shared with the family at www.heartlandfuneralhome.net

The family of Robert Ray Agee created this Life Tributes page to make it easy to share your memories.

Send flowers to the Agee family.