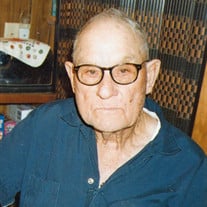 Robert J. Harding Jr. of Blanket, received his angel wings Saturday, May 8, 2021, in a Comanche nursing home, with his loving family by his side. Robert was born January 12, 1924. He was 97 years old in his body, but his mind and will were much younger. He went from this life into the next peacefully and at rest. Robert was born in Millersview, Texas to Robert and Laredo (Hawkins) Harding. They later moved to Gouldbusk, Texas where he met the love of his life Theola (Sally) Ann Myers. They met as kids, grew up as teenagers and later this grew to the love they continued to have throughout the 76 years they were married. Many people will remember Robert as a truck driver for many years, hauling brick, hay, feed, dirt and asphalt, just about anything that needed to be hauled, except for livestock. He always said he would never drive a "bull wagon". And he did not in all the time he drove. He was known as Bluebird by his trucker friends and was well respected by those that knew him. He won the Safe Driver of the Year award numerous times while working at White's Mines in Brownwood. He also worked as a farmer, night watchman, built trailer houses, was a shade tree mechanic and did any other job that provided for his family. He loved his family, working hard to provide and take care of them. Robert passed on his wisdom of shade tree auto mechanics to his sons and his grandsons. He taught his daughters and granddaughters the value of a good man, and knowing the basics of being independent. Most give him the credit for knowing what they know about working on cars and trucks. He was a quiet man, but when he spoke, people listened. He passed on the knowledge he had of what was right and wrong. He taught his children to be respectful, caring individuals. He did like to tell his stories about his times driving trucks, especially the one about Ranger Hill. Anyone that has spent any time with him knows that story. He never met a stranger, making friends wherever he went. People were drawn to his quiet calm and found comfort in getting to know him. Robert would help anyone, give the shirt off his back if they needed it. He always looked for the good in people, believing that everyone is basically good. He was loved and called friend by many and will be greatly missed. He was preceded in death by his mother, Laredo and father Robert, 6 brothers, Tom Mix, Billy, Carl Gail, Delbert, Benny and Donald Glen, and one sister, Peggy. He is survived by his loving wife of 76 years, Theola (Sally) Harding of Blanket, children, Robert O. Harding and wife Claudia, of Blanket, Patricia Jackson and husband Harvey of Blanket, Harry Harding and wife Ruth Ann of Zephyr and Bonnie Harding of Blanket, 7 grandsons, 4 granddaughters, 22 great-grandchildren and 10 great-great-grandchildren. The family wishes to extend their deepest appreciation to the Western Hills staff and nurses and the Alpha and Omega Hospice team for the care and love that was shown to our dad during his time with them. Services for Robert will be Tuesday, May 11, 2021, at 2:00 PM at the Heartland Funeral Home Chapel in Early. Burial will follow in the Blanket Cemetery. Condolences, memories and tributes can be offered to the family online at heartlandfuneralhome.net

Robert J. Harding Jr. of Blanket, received his angel wings Saturday, May 8, 2021, in a Comanche nursing home, with his loving family by his side. Robert was born January 12, 1924. He was 97 years old in his body, but his mind and will were much... View Obituary & Service Information

The family of Robert J. Harding, Jr. created this Life Tributes page to make it easy to share your memories.

Send flowers to the Harding family.