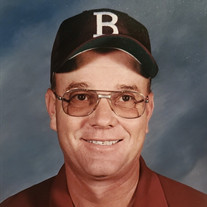 Robert Lynn Sanders went home to be with his Lord and Savior unexpectedly on Tuesday morning, August 3, 2021. He was born on September 15, 1953 to Ray and Ira Belle Sanders in Lubbock. Robert married the love of his life, Gayla, on May 27, 1977. In 1981 they moved their young family to Robert Lee, Tx, and they lived there 23 years. He was a loving father to his two daughters, Amanda and Melissa, and his stepdaughter Shatan. He coached his daughters in little league, and was a very hands on dad, involved in everything they were in. He later graduated to Papa of Amanda and Melissa's children: Hallie, Jayton, Preston, Mason and Kamryn. He was such a loving grandfather to these kids, and loved them something fierce. His grandchildren were his life, and he was involved in all of their activities, not missing much. Robert was a friend to everyone. Everyone's "Mr. Fix it". No matter what it is was, if you broke it, he could fix it. He was the most gentle, kind, servant hearted person. Anything you needed, the shirt off of his back, he would gladly give it to you. He was selfless and this was evident in the way he lived his life. Robert and Gayla moved to Brownwood in 2013 to be near their daughter and her family. He began working for Brownwood ISD in the maintenance department, and retired from BISD Jan 31, 2021. He gained many close friends from BISD. He thought highly of them all. He was preceded in death by his beloved grandson Mason Cole Williams, his brothers Terry, Jerry, and Jimmy Sanders, and sister Linda Stalter. He was also preceded in death by his parents, Ray and Ira Belle Sanders, as well as his mother-in-law, Dorothy Nance. He is survived by his loving wife Gayla Sanders of Brownwood, daughters Amanda Warren and husband Justin of Robert Lee, Melissa Williams and husband Randy of Brownwood, and Shatan Rushing of Austin; grandchildren Hallie Valenzuela and husband Alex of San Angelo, Jayton Warren of San Angelo, Preston Warren of Robert Lee, and Kamryn Williams of Brownwood. He is also survived by his brothers Mike Sanders of Valencia, California, Dennis and Greg Sanders both of Lubbock and many, many nieces and nephews that he loved deeply. Services will be held at Coggin Avenue Baptist Church at 2:00 pm on Friday, August 6th. Visitation will be at Heartland Funeral Home in Early, Thursday, August 5th from 6 to 8 pm. In lieu of flowers, the family asks that donations be made to the Mason Williams scholarship fund at Coggin Ave Baptist church.

Robert Lynn Sanders went home to be with his Lord and Savior unexpectedly on Tuesday morning, August 3, 2021. He was born on September 15, 1953 to Ray and Ira Belle Sanders in Lubbock. Robert married the love of his life, Gayla, on May 27,... View Obituary & Service Information

The family of Robert Lynn Sanders created this Life Tributes page to make it easy to share your memories.

Robert Lynn Sanders went home to be with his Lord and Savior...

Send flowers to the Sanders family.