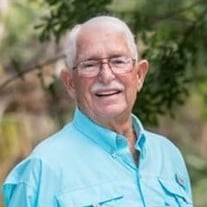 Robert William Stewart (“Stew” as he was known to his loved ones) passed away on Thursday, September 24, 2020 in Port Orange, Florida at the age of 80. Visitation will be from 4:00 – 6:00pm on Wednesday, September 30th at Heartland Funeral Home in Early, Texas, followed by a private Celebration of Life. A graveside service for the family will be held at 9:00 a.m., on Friday, October 2, 2020 at the Dallas-Fort Worth National Cemetery in Dallas, Texas. Stew was born August 14, 1940 in Georgetown, South Carolina. He graduated from Palatka High School in Palatka, Florida. After graduation he joined the Air Force and served for eight years, the majority of which he served as a Morse Code Intercept Operator on the island of Crete, Greece. He finished his career at Goodfellow Air Force Base in San Angelo, Texas where he met and married Patricia Carter. They had three children, Robert, Kelly and Gene. Later in life he found his true love, Grace Blythe, whose heart he stole in 1981. They married February 11, 2000 in Cloudcroft, New Mexico. Following his Air Force career, Stew pursued his profession as a Court Reporter, where he became a Merit Writer, placing him amongst the top 10% of Court Reporters in the nation. He served as a court reporter for 45 years in Brown, Tom Green, Denton, McKinney and several other counties in Texas. While serving as a court reporter he continued his military career serving in the Texas Army National Guard. Stew is survived by his wife of 20 years, Grace Blythe Stewart, his three children Robert Stewart Jr. (his wife Kathryn and children Grant and Courtney) of Southlake Texas; his daughter Kelly Stewart-Coleman (her children Kobe and Kory) of Georgetown, Texas; his son Gene Stewart (his wife Kerri and pups Phil, Pete and Paul) of Prosper, Texas; his step-son Justin King (his sons Cameron and Jaxon King) of Brownwood, Texas, and loved extended family members too numerous to mention. He is also survived by his best friends, Charlie, Otis, Richard and Perry, otherwise known as “The CORPS.” Stew was preceded in death by his brother Michael Stewart and sisters Bobbie Jean (Stewart) Oliver and Betty Jo (Stewart) Powell. Stew, save a dance for Grace and continue to make everyone laugh in Heaven as you did here on Earth. We will miss you so much. Love, Your Family and Friends.

The family of Robert "Stew" Stewart created this Life Tributes page to make it easy to share your memories.

Robert William Stewart (“Stew” as he was known to his loved ones)...

Send flowers to the Stewart family.