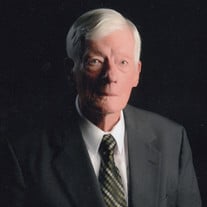 Robert M. Stone, Sr. who had a lengthy life is now bathed in God's glory, once again knowing all those whom he loved and those who loved him. Mr. Stone passed from this life Thursday, October 28, 2021 at his home. Per Bob's wishes, there will be no public services. Cremation is under the direction of Heartland Funeral Home and inurnment will be in the columbarium at St. John's Church in Brownwood, Texas. (stjohnsbrownwood.com). Bob was born in Texas City on October 9, 1928, the son of the late Henry M. and Myrtle Gill Stone. He received a Bachelor of Science (B.S.) degree with a double major in physics and mathematics from Southwest Texas State College (now Texas State University), a Master of Education (M. Ed.) degree in mathematics and education from Howard Payne College along with a permanent certificate in both elementary and secondary teaching. He completed all classroom coursework toward a PhD in mathematics, astrophysics and computer sciences in the 1960's under National Science Foundation Fellowships and Grants, lacking only a dissertation to obtain his doctorate. Bob's graduate studies were at the University of Kansas, The University of Texas at Austin and at Sam Houston State College. He had other short courses in computer systems and programming languages while employed by Control Data Corporation in California's Silicon Valley and near the Houston Space Center. He was a member of the Texas State Guard from 1944-46, on active duty in the US Army from 1950-1953 during the Korean War and served as an Officer in the Army Reserves from 1953-1967. In 1952, Bob married Ethel Trout and together they had three children, Robert, John and Suzanne, three grandchildren, Pamela, Melissa, and Kimberly, and three great-grandchildren, Lois, Ezra, and August. Ethel passed away in 2004. He then married, Anna M. Townsend on November 7, 2009. Bob enjoyed sports, hunting, fishing, music appreciation and ranching. He was affiliated with the National Education Association, Texas State Teachers Association (life member), National Rifle Association (Life Member), Texas State Rifle Association (Life Member), American Hereford Association, American Angora Goat Breeders Association, Texas Cashmere Association, Cashmere Producers of America and various Masonic organizations. While physically able, he was active in the Anglican-Episcopal Church in Brownwood. Bob was a lifelong student and teacher. He took his calling seriously. He loved nothing more than to help educate students of all ages in the classroom and in other settings. Throughout his career he served as a classroom teacher in Zephyr, Austin, and Goldthwaite. He was an assistant professor of mathematics at Howard Payne College from 1954-1960 and served as the School Principal at Zephyr during the 1960-1965 school years. Bob joined Control Data Corporation 1969 and was involved in mainframe computer applications in California's Silicon Valley until 1972 when he accepted an offer to work on Control Data's contract with NASA, now the Johnson Space Center, in Houston. In the early 1980's, Bob returned to teaching in Goldthwaite and his ranching roots near Zephyr. Bob was predeceased by his wife of 52 years (Ethel Trout) in 2004, his daughter (Suzanne Perkins) in 2012, an infant son (Ralph William Stone) in 1953 and one stepson (Paul Townsend), in 2020. He is survived by his wife, Anna Tims Stone; two sons, Robert and wife Renee, of Tyler, and John of Zephyr; three grandchildren; three great-grandchildren; and stepsons, Bobby, Billy, and David Townsend of Temple. In lieu of flowers, Mr. Stone requested that any gifts be made to the Good Samaritan Ministries serving Brown County (goodsambwd.org).

Robert M. Stone, Sr. who had a lengthy life is now bathed in God's glory, once again knowing all those whom he loved and those who loved him. Mr. Stone passed from this life Thursday, October 28, 2021 at his home. Per Bob's wishes, there... View Obituary & Service Information

The family of Robert Melvin Stone, Sr. created this Life Tributes page to make it easy to share your memories.

Robert M. Stone, Sr. who had a lengthy life is now bathed in...

Send flowers to the Stone family.